This image of a jellyfish was created by a digital artist


An image has been shared thousands of times on social media alongside a claim it shows a "Spanish Dancer Jellyfish". The claim is false; the image was created digitally and uploaded to a website in 2012. Spanish Dancers are not a type of jellyfish, but a large sea slug.

The image was shared by a New Zealand-based user here on Facebook.

The image was shared thousands of times on Facebook alongside a similar claim here, here, here and here.

Titled "Spanish Dancer", it was uploaded to his website here in August 2012.

The image was created using a digital fractal creation program called Apophysis, according to his website.

"Do not look for the name of these species: they came straight out of the Apophysis software, ideal for creating diaphanous "mollassoneries”, "potential" living organisms based on fractals," the website explains.

Below is a comparison of the image in the Facebook post (left) and the original uploaded by Le Guen (right): 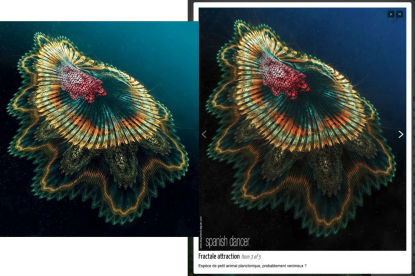 Moreover, the Spanish Dancer is not a jellyfish, but a type of large sea slug that can grow up to 60cm in size.

It is found in the tropical waters of the Western Pacific and Indian Oceans, according to Atlas of Living Australia (ALA).

"If the animal is disturbed, it unfolds its edges and can swim through contractions and undulations of the body to move away from the disturbing element. Its common name, Spanish dancer, comes from this particular defense," the website reads.

Below is a comparison of Le Guen’s image (left) and a screenshot of a photo from AFP’s archives showing a species of Spanish Dancer found in New Caledonia (right). 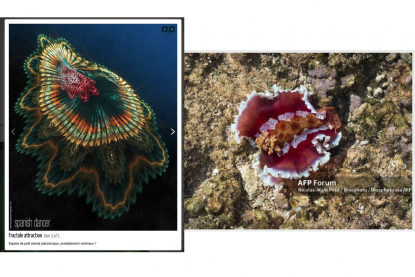 A comparison of Le Guen’s artistic rendering (L) and a screenshot of a photo from AFP’s archives showing a species of Spanish Dancer found in New Caledonia (R).