Skip to main content
A man cleans up graffiti scrawled by protesters on a Starbucks coffee shop in Hong Kong on September 30, 2019 ( AFP / Jerome TAYLOR)

An image has been shared hundreds of times in Facebook posts that purport to show a message urging shoppers to boycott a "pro-China" company displayed on a billboard outside a department store in Hong Kong. However, the image has been doctored; the original photo shows an advertisement for a cosmetics brand and the store said they never ran the message.

Maxim's is a major Hong Kong restaurant chain known for its eponymous bakeries. It also runs Starbucks outlets in the city. 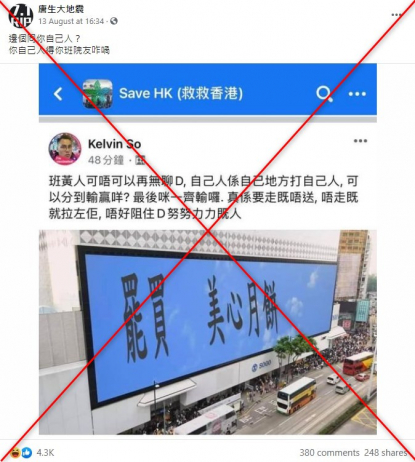 The group came under fire from pro-democracy campaigners after Annie Wu, the daughter of its founder Annie Wu delivered a speech to the UN's human rights council in September 2019 in which she condemned the protest movement and said Beijing's hardline stance against democracy advocates should be supported.

Her speech triggered a wave of vandalism and boycotts towards Starbucks and Maxim's, which saw stores trashed around the city.

Since the anti-extradition bill protest in 2019, pro-democracy protesters are rewarding shops and restaurants that support their cause by building a "yellow" economy, while targeting "blue" pro-government and pro-China businesses for vandalism or boycotts, as AFP reported here on January 15, 2020.

"Who is on your side? The only people left on your side is your friends in the old people's home," the Facebook post's caption reads in reply.

The same picture was shared alongside a similar claim on Facebook here and here. 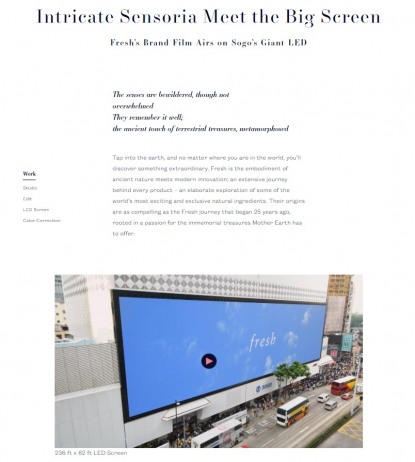 The thumbnail of the video is identical to the picture circulating on social media, except the billboard, which features an advertisement for cosmetics brand Fresh. Below is a screenshot comparison of the doctored photo (left) and the video published by Moss Studio + Magazine (right).

"We hereby clarify the related advertisement has never been published on 'CVISION' of SOGO Causeway Bay," a spokesperson told AFP.