Image collage does not show 'flower of the Holy Spirit'

The images were shared by a New Zealand-based Facebook user here.

Text superimposed above the image claims it shows a “rare orchid known as the "flower of the Holy Spirit"," which only blooms once per year.

“Before blooming, it looks like praying saints, and once it blooms it turns into a flying dove”, the text reads.

The Orchid family of plants, known as Orchidaceae, includes more than 26,000 species distributed all over the world, according to Encyclopedia Britannica.

The images have been shared thousands of times by other social media users alongside similar claim, including here and here.

A visual comparison found neither image shows Peristeria Elata, commonly known as the “flower of the Holy Spirit”.

The rare orchid, also known as the "Holy Ghost" flower in Spanish, is the national flower of Panama.

It is native to Central America, but can also be found in Ecuador and Venezuela.

The plant gets its name because its inner petals resemble a dove's head and wings.

It is shown in this YouTube video uploaded by a channel called Orchids Web.

A reverse image search found the left image has been taken from this page on Orchid Works, a website devoted to photographer Greg Allikas’ orchid pictures.

This refers to the name of the species followed by a reference to the person who named it. It also features on the American Orchid Society website.

The species is native to Central America and has been found from northern Mexico to Nicaragua, according to Britain's Kew Royal Botanic Gardens.

Below is a comparison of the image in the Facebook post (L) and the original by Greg Allikas (R): 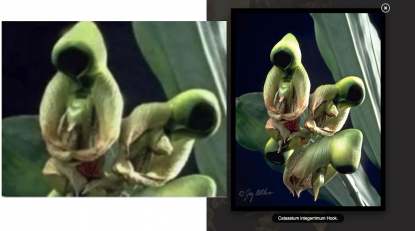 A comparison of the image used in the Facebook post (L) and the original by Greg Allikas (R).

The photo featured on the right of the Facebook post was found on this Etsy page selling “White Dove/Egret Flower Seeds”.

The images show the “rare dove flower (Habenaria radiata) The White Dove/Egret Flower.. also sometimes referred to as the Fringed Orchid”, according to the Etsy listing.

Habenaria Radiata -- now known as Pecteilis Radiata -- is native to Japan, Korea and parts of China, according to the Internet Orchid Species Photo Encyclopedia.

Below is a comparison of the image in the Facebook post (L) and the one published on Etsy (R):

A comparison of the image used in the Facebook post (L) and the one found on RobsRareandGiantSeed Etsy webpage (R).

Dr Katharina Nargar, an orchid expert from James Cook University, told AFP that the flower pictured on the left in the Facebook post is a type of Catasetum, while the one on the right is Pecteilis Radiata.

Dr Nargar explained the confusion may have arisen because of the similarity between the common names for Peristeria Elata -- also known as the Dove Orchid, and Pecteilis Radiata -- sometimes called the White Dove flower.

“They are often mislabelled because common names are not very specific," Dr Nargar said.

“It’s very easy to call [Pecteilis Radiata] the Dove Orchid and so that’s why in science we use the Latin names that only one species can have that particular name, whereas common names can be shared.”