A photo has been shared by Facebook users in Myanmar alongside a claim it shows one of five youths who jumped from a building in Yangon to escape a police raid in 2021. The posts, however, are misleading. The photo shows a parkour practitioner performing a stunt in Russia in 2009. 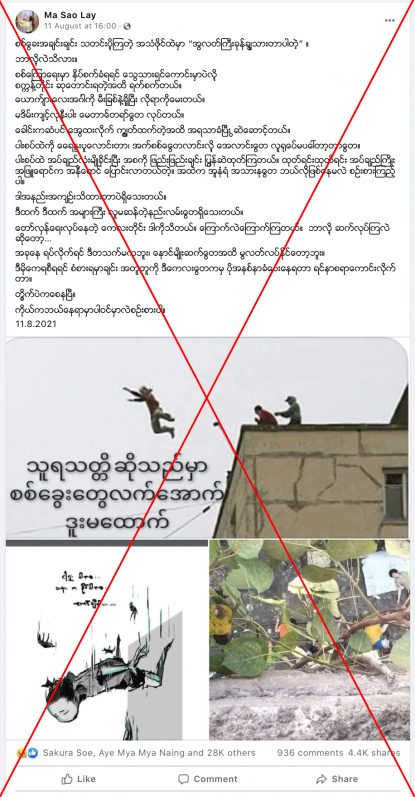 Burmese-language text over the first image translates to English as: "Braveness is never kneeling down under the junta."

The second image is a cartoon drawing of the same incident. The third image appears to show bodies taken from the top of a building.

The Burmese-language caption reads in part: "The audio file leaked from the police force includes "[The five youths] just jumped off." Do you know why they did it? It's because of brutal interrogations by the police."

The post then lists brutal methods of interrogation, before continuing: "Everyone who takes part in the revolution knows it. They are afraid of it too. But why do they continue to go against the junta? If they stop now, not only our present lives but also our future generations can't escape [from the junta]. Feeling so sad as they sacrificed themselves for us".

The post was shared after an incident in Yangon on August 10, 2021.

Five young people jumped from a building to escape arrest, resulting in the deaths of one man and one woman, as reported by AFP here.

Similar images have been shared in various Facebook posts, for example here, here and here, alongside a similar claim.

Reverse image and keyword searches found the first photo was taken on November 11 2009, by Anatoly Maltsev for the European Press Agency (EPA).

The picture caption in the EPA archive reads: "A parkour practitioner jumps from an 18-meters high roof to 14-meters high roof across a 7-meters wide gap in St. Petersburg, Russia, 18 November 2009. Parkour is a physical discipline of French origin in which participants run along a route, attempting to negotiate obstacles in the most efficient way possible, as if moving in an emergency situation, using skills such as jumping and climbing, or the more specific parkour moves."

Below is a screenshot comparison of the photo in the misleading Facebook posts (L) and the picture from the EPA archives (L):

The second image is an artist's impression of the incident.

The third image was shared online soon after the Yangon incident. It appears to be taken from the top of a building looking down at bodies on the ground.

AFP has not been able to verify its exact origin. It has not circulated online before the incident on August 10, 2021.