The sewing machine was invented centuries after Prophet Mohammed

A photo has been shared repeatedly in multiple Facebook posts that claim it shows an antique sewing machine owned by Aishah, one of Prophet Mohammed's wives. The claim is false: the sewing machine was invented centuries after Aishah lived.

Text on the photo reads: “The sewing machine of Hazrat Aishah. Share it by saying Praise be to Allah. May Allah reward you".

The post’s Urdu-language caption reads: "Praise be to Allah. All Muslims should like this page with open heart and help us make it the biggest Islamic page in Pakistan. If you like the post, do not forget to share it." 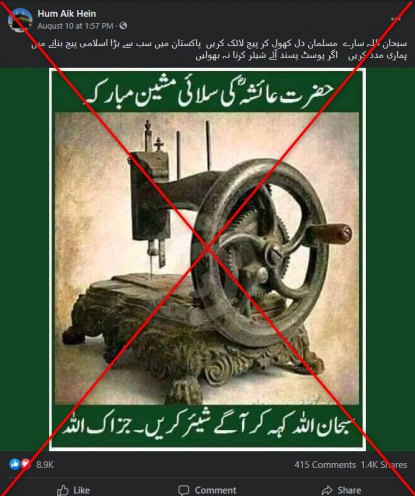 The same photo was shared here, here and here on Facebook and here on Twitter alongside a similar claim.

But the claim is false. Aishah lived centuries before the sewing machine was invented.

Aishah was born in 614 in Mecca, Arabia [now in Saudi Arabia] and died in July 678, according to Encyclopedia Britannica.

Historians generally regard the first real sewing machine as a device patented by Englishman Thomas Saint in 1790, according to the International Sewing Machine Collectors' Society.

Another early sewing machine was designed and manufactured in France by Barthélemy Thimonnier. He received a patent for it in 1830, according to Encyclopedia Britannica.

A Google reverse image search of the sewing machine photo found it was published here on stock photography website Dreamstime.

The uploader of the photo did not immediately respond to AFP’s request for more details about it.

Below is a screenshot comparison of the photo in the misleading Facebook posts (L) and the photo on Dreamstime (R): 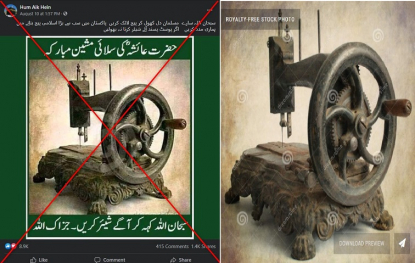