Skip to main content
Pictures of a traffic accident have been shared with a claim it happened in Pakistan, but the images actually come from India ( AFP / INDRANIL MUKHERJEE)

Photos of a car that was split in two in a crash have been shared in multiple Facebook and Twitter posts claiming they show an accident in Pakistan. The claim is false; the photos were taken in India, when a car was sliced in half in a freak accident that killed three people, police told AFP.

"In Pakistan, a Kia Sportage car sold for 60 lakhs split in two in an accident," reads an Urdu-language tweet from August 4. "Check its quality. Companies selling tin boxes for several lakhs should definitely have their quality checked."

The tweet, which has since been deleted, shows the debris of a car sliced in half. 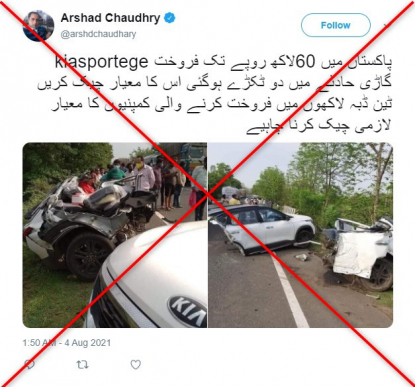 The photos also circulated in Facebook posts claiming they were taken in Pakistan here, here, here and here.

However, the claim is false. A reverse image search found similar photos in reports by The Economic Times and India Today about a crash on June 11 on the Chhindwara-Nagpur highway.

The Economic Times quoted Saunsar Police Inspector RR Dubey saying the car was split in two from the impact of the crash, and not as a result of being cut open by emergency rescuers.

Below is a screenshot comparing the images in the false post (left) with the ones posted by the media outlets (right): 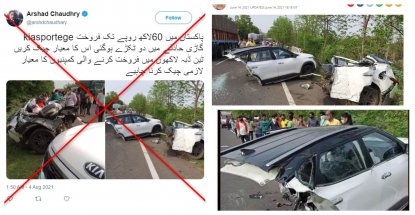 Screenshot comparing the images in the false posts (L) and the originals from India Today and The Economic Times (R), taken on August 5, 2021

Contacted by AFP, Dubey said the car split in two from the impact of hitting a culvert in the town of Saunsar in Madhya Pradesh state, which sits on the Chhindwara-Nagpur highway.

"I can confirm the accident in Saunsar. We reached the spot with our team right after the accident and saw the car split in two," he said. "Three people had lost their lives in this accident."

A spokesperson for Chhindwara Police Commissionerate also said the crash happened in Saunsar.