A video with hundreds of thousands of views on multiple social media posts has circulated online alongside a claim it shows Russian President Vladimir Putin playing Taiwan's National Flag Anthem on a piano during his visit for the One Belt, One Road forum in 2017. The claim is false: the two songs he played are Soviet classics, "Moscow Windows" and "City of the Free Neva". 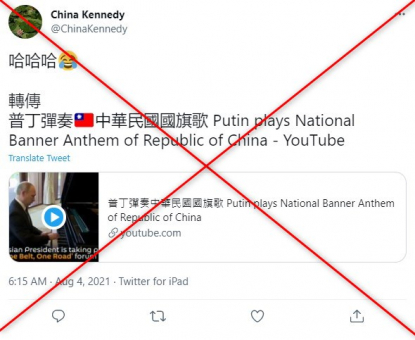 The post's caption reads in both traditional Chinese and English as: "Putin plays National Banner Anthem of Republic of China", Taiwan's official title.

The National Flag Anthem of the Republic of China is performed during flag ceremonies and at international events where Taiwan participates officially under the name of Chinese Taipei.

The YouTube video shows Putin playing piano in a hall.

The claim, however, is false: Putin did not play the song in this video.

The songs played in the video do not match the melody of the National Flag Anthem of the Republic of China, as published in this YouTube video by Taiwan's Ministry of Foreign Affairs.

A reverse image search on Google has found the original video published here by Sputnik, a Russian digital news agency, on May 14, 2017.

The video description reads: "Putin played the piano while waiting to meet Xi Jinping. The Russian President is taking part in the ‘One Belt, One Road’ forum. " 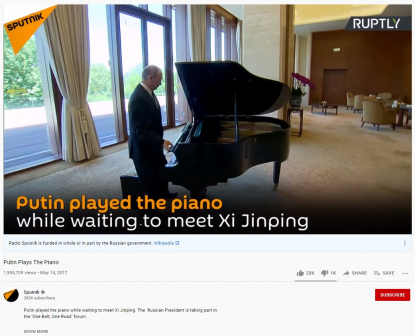 Below are screenshot comparisons of key frames from the video in the misleading post (L) and the YouTube video (R): 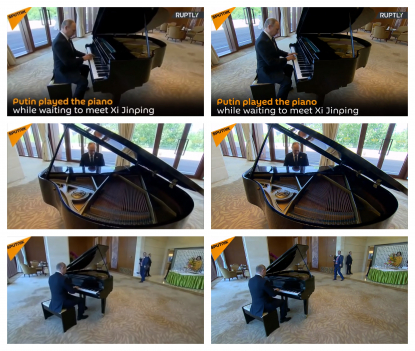 The same video was also published by Russian state-media RT here on May 14, 2017.

According to RT's report, Putin gave the impromptu performance as he was waiting for Xi Jinping at the Chinese president's official residence.

The two tunes in the video are Soviet classics from the late 1950s, "Evening Song (The City of the Free Neva)" by Vasily Solovyov-Sedoi and "Moscow Windows" by Tikhon Khrennikov.

"Evening Song" was the unofficial anthem of Putin's native city, Leningrad, which is now known as St. Petersburg.

And "Moscow Windows" is considered the Russian capital's unofficial anthem.

AFP has also published a similar video here on May 15, 2017, with the headline reading "Putin the piano man plays Soviet-era tunes in Beijing".