This footage shows flooding in Turkey in 2020

A video has been viewed tens of thousands of times in Facebook posts that claim it shows animals being swept away by torrential rain in Turkey in July 2021. However, the video was shared in a misleading context; the footage actually shows flooding in the Turkish town of Ercis in June 2020.

The clip shows animals being swept away by the floods, while sounds of people screaming can be heard in the background.

"In Turkey, flooding in the east and wildfire in the south, affecting many farm animals," the Thai-language Facebook post reads. "In the eastern part, torrential rain on July 29-30 affected many farms and over 1,000 animals have lost their lives, including sheep and goats."

"In the south part, near the Mediterranean, Turkey experienced a heavy wildfire in over 100 spots, affecting many people, buildings and farm animals." 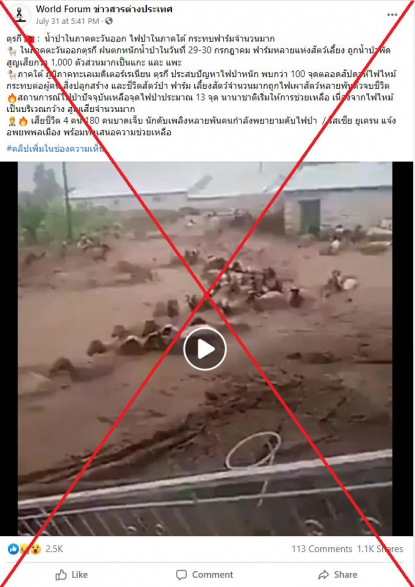 Floods in Turkey's northeastern province of Giresun in the Black Sea region have killed at least six people, according to Turkey's Anadolu News Agency on July 23. The floodwaters damaged hundreds of buildings.

Similar posts were shared on Facebook here, and here.

However, the video was shared in a misleading context.

Ercis is a town in the Van province of Turkey.

The logo of DHA News Agency can be seen on the top-right of the footage.

The video in the misleading posts corresponds to the aHaber report from the twenty-second mark onwards.

In the background, Kurdish-language voices can be heard saying "I wish I hadn't seen this disaster" and "Our house is completely gone!"

Below is the screenshot comparisons of the video in the misleading posts (L) and the video reported by aHaber (R): 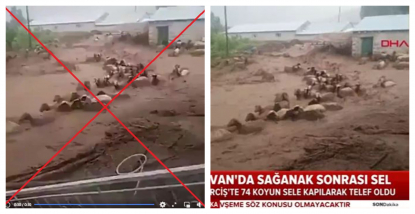 The video's description reads: "The heavy rain, which was effective in the Ercis district of Van, caused flooding. 74 sheep and goats perished. "

The flooding incident in the Ercis district of Van has been reported in multiple Turkish-languages media outlets between June and July 2020 here, here and here.