Skip to main content
Flowering CBD cannabis plants in a greenhouse at a CBD cannabis production company near Ollon, western Switzerland on May 19, 2021 ( AFP / Fabrice COFFRINI)

Facebook ads claim cannabidiol (CBD) gummies were endorsed by business reality show "Shark Tank." But they are not on a list of products that appeared on the show, and two sisters pictured in an image used in the ads say they are unaffiliated with the gummies and that the photo was digitally altered. 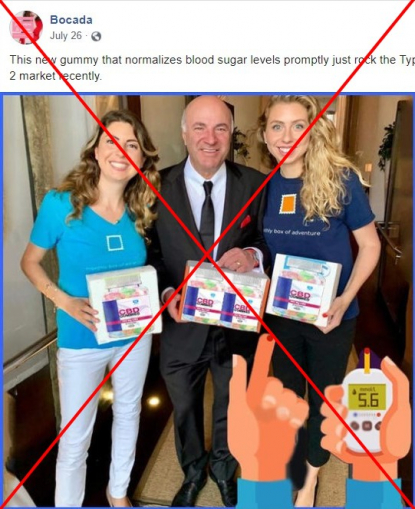 Similar ads for CBD gummies appeared on Facebook here and here. They also claim to have a "Shark Tank" endorsement, and make various assertions about the gummies being able to reduce AC1 levels for those with Type 2 diabetes.

The "Shark Tank" website has a list of products that have appeared on the program as of March 22. Eagle Hemp CBD Gummies are not among them, nor is any product containing the words "CBD" or "gummies."

The website also warns that "the internet has become overrun with advertisements featuring products allegedly endorsed by 'Shark Tank' or the Sharks... While many products claim to have been on 'Shark Tank,' that is not always the case."

AFP attempted to reach Kevin O'Leary and the "Shark Tank" team for comment but had not received a response by the time of publication.

The ads for the CBD gummies link to a web page that claims "Powerful Type-2 diabetes Gummies Nets The Biggest Deal in Shark Tank History!" It refers to the Khalife sisters by name, crediting them as the inventors of the product. 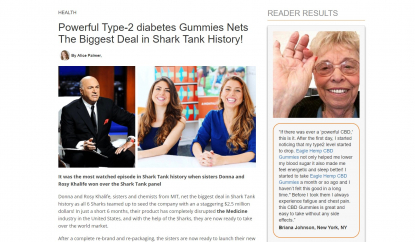 Screenshot of a webpage taken August 5, 2021

They appeared in episode 9 of the fifth season of "Shark Tank," which aired on November 15, 2013. However, they have no connection to any CBD gummy brands.

The Khalife sisters told AFP in an email on August 3, 2021 that they are "in no way affiliated with the CBD gummies" and that they "never pitched this product on Shark Tank."

Instead, they are the inventors of Surprise Ride, a subscription service that delivers activity kits for children. The investment opportunity was originally passed up by investors on the show, but nearly three years later, O'Leary invested in the company on the program's companion show "Beyond the Tank."

"We don't currently support any ads or claims using our likeness to sell CBD Gummies. The photo of us holding a Surprise Ride activity kit has been manipulated," the sisters said, providing AFP with the original unaltered image as evidence.

And while the web page linked to in the ads for CBD gummies claims they can "reverse Type 2 Diabetes instantly and for good," the American Diabetes Association says that despite the hype around these types of products, "there is no noticeable effect on blood sugar (blood glucose) or insulin levels in people with Type 2 diabetes."