This video shows an aerial view of Mount Kilimanjaro, not Mount Kailash

A video showing an aerial view of a snow-capped mountain peak has been shared and viewed thousands of times on Facebook with a claim that it shows Mount Kailash in Tibet, China. This claim is false. The video actually shows Mount Kilimanjaro in Tanzania.

It shows an aerial view of snow-capped mountains.

The Hindi-language caption says, "Hello. Due to the efforts of the Government of India, the view above Mount Kailash has become possible for the first time. 21-7-2021
Sawan has started, you should also pray." 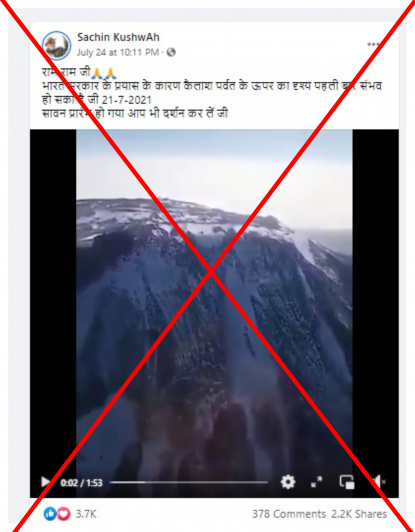 The video has circulated during the Hindu month of Sawan, which is devoted to worshipping the Hindu god Shiva. In 2021, Sawan falls from July 25 to August 22.

Hindus believe that Mount Kailash — a mountain in western Tibet that is revered by different Asian religions — is the abode of Shiva.

The video has been viewed more than 2,000 times after it also appeared on Facebook here, here and here.

Below is a screenshot comparison of the video in the misleading post (L) and the genuine video on YouTube (R):

Precision Air is an airline based in Dar es Salaam, Tanzania.

Below is a screenshot from another video of Mount Kilimanjaro on YouTube, which shows the same snow patterns on the mountain, from a different angle. 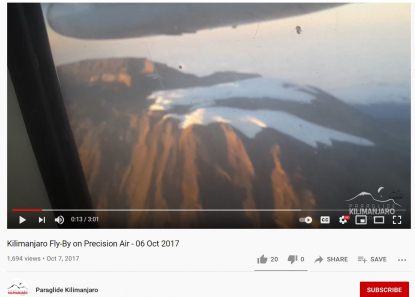 The post's caption reads: "Aviation doesn't end with paragliding, this morning passengers aboard Precision Air's flight to Nairobi got to experience a truly remarkable fly-by around the summit of Mt. Kilimanjaro. Captain Rizwan's enthusiasm for aviation, Kilimanjaro and Tanzania is an inspiration for us all! Asante Sana!"

The pilot left the company about two years ago. Precision Air tweeted on August 15, 2019: "Capt. Rizwan Remtula perfomed his last flight with us in style! He has been with us for 16 years and he will be missed for his passion to promote Mt.Kilimanjaro by perfoming 360 nearby pass of Mt.Kilimanjaro peak."