This photo was taken in the Netherlands before the Tokyo Olympics

As Olympic Games are underway with strict virus restrictions, a photo has circulated online in posts that claim it shows a competition venue in Tokyo filled with teddy bears in lieu of spectators. The claim is false: the photo was taken in a stadium in the Netherlands and has circulated online months before the Tokyo Olympics.

"From the Tokyo Olympics Game [sic], a photo of the audience in the stadium," reads the Thai-language caption to this photo shared on Facebook on July 27.

The photo shows a stadium filled with teddy bears. It has been shared over 1,500 times since it was posted. 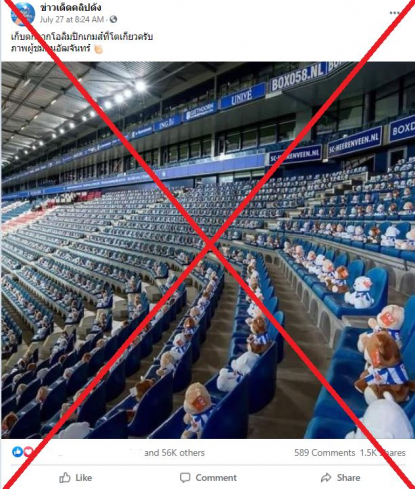 The misleading post circulated online as the Olympic Games are held in Tokyo under strict anti-virus rules, with spectators banned from most competition venues, AFP reported.

The same photo was also shared here, here and here on Facebook alongside a similar claim.

The claim is false: the photo was not shot during the Tokyo Olympics.

A Google keyword search found the photo corresponds to this image posted by the Getty Images news agency on October 24, 2020 -- several months before the Olympics opened on July 23, 2021.

The Getty Images photo is captioned: "HEERENVEEN - No supporters because of the tightened corona measures, but 15 thousand teddy bears with a football shirt in the stands before the start of the Dutch Eredivisie match between sc Heerenveen and FC Emmen in the Abe Lenstra Stadium on October 24, 2020 in Heerenveen, the Netherlands."

Below is a screenshot comparison between the image in the false Facebook posts (L) and the photo published by Getty Images (R):

The image corresponds to a video embedded in this report published by The Stadium Business news organisation on October 26, 2020.

The location of the image also corresponds to this Google Street View of Abe Lenstra Stadium in Heerenveen town in the northern part of the Netherlands.