This black-and-white picture shows an African slave trader, not an 18th-century Indian ruler

Multiple Facebook posts have shared a photo collage showing a coloured painting and a black-and-white picture, alongside a claim the latter is the real photo of Tipu Sultan, an 18th-century Muslim Indian ruler. The claim, however, is false. The black-and-white picture shows an African slave trader who lived in the 19th century. 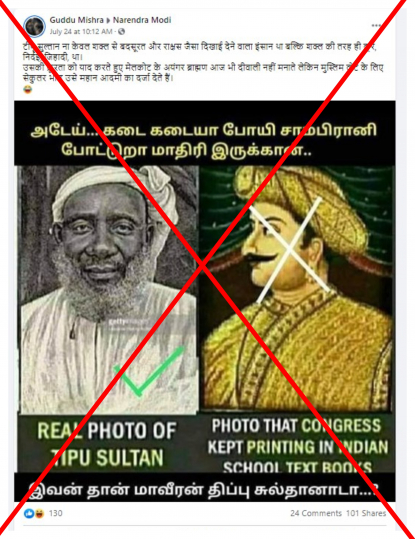 The English text superimposed below the black-and-white picture says: "Real photo of Tipu Sultan", while below the coloured painting, it says: "Photo that Congress kept printing in Indian school textbooks".

Translated from Hindi to English, the post's caption reads: "Tipu Sultan was not only ugly and demon-like in appearance, but was also cruel, ruthless and jihadi, just like his face.

"Remembering his cruelty, the Iyengar Brahmins of Melkot do not celebrate Diwali even today, but secular rhetoric for the Muslim vote gives him the status of a great man."

Tamil script superimposed on the text reads: "Friends, this man looks like a 'sambrani'," referring to a Muslim sage who blesses shops in markets in exchange for alms.

"How can he be a warrior and Tipu Sultan?"

Tipu Sultan was an 18th-century ruler of Mysore kingdom, in the present-day southern Indian state of Karnataka, who waged wars against the British East Indian Company until he was defeated and killed in a battle in 1799.

In recent years, the Bharatiya Janata Party-led Karnataka government has been trying to remove Tipu Sultan from the state's history textbooks, saying he forcibly converted Hindus and Christians to Islam.

The state's opposition Congress party is opposed to the plan.

The Iyengar Brahmins of Melkot in Karnataka do not celebrate the Hindu festival of Diwali in memory of their ancestors who were massacred by the ruler.

The collage has been shared more than 300 times after it also appeared with a similar claim on Facebook here, here and here.

A reverse image search on TinEye, followed by a keyword search on Google, found this picture on the website of the Getty Images photo agency.

Below is a screenshot of the Getty Images website:

The photo was also published here on the website of stock photo agency Alamy.

The caption further says: "He was famously known by the natives of East Africa as Tippu Tib after the sounds that his many guns made. A notorious slave trader, plantation owner and governor, who worked for a succession of sultans of Zanzibar, he led many trading expeditions into Central Africa, involving the slave trade and ivory trade."

Below is a screenshot of the image in the misleading post (L), the Getty Images picture (C) and the Alamy photo (R):

Screenshot of the image in the misleading post (L), the Getty Images picture (C) and the Alamy photo (R)

The coloured painting is commonly used to depict Tipu Sultan, from books to newspaper articles.

According to the Business Insider and the National Geographic, the world's earliest surviving photograph was taken between 1826 and 1827 — nearly three decades after the death of Tipu Sultan.