A screenshot of a tweet has been shared in multiple Facebook posts which claim it shows the Romanian Football Federation (FRF) criticising South Korean broadcaster MBC for mocking a Romanian player. The claim is false: the Twitter account holder has publicly dismissed its connection with the FRF, and the federation operates its Twitter account under a different username. No reports or statements can be found to show that the federation has publicly criticised MBC.

"You better be careful when you visit Romania. If anyone asks if you are Korean, just tell them you are from either Japan or China," reads the post's Korean-language caption. 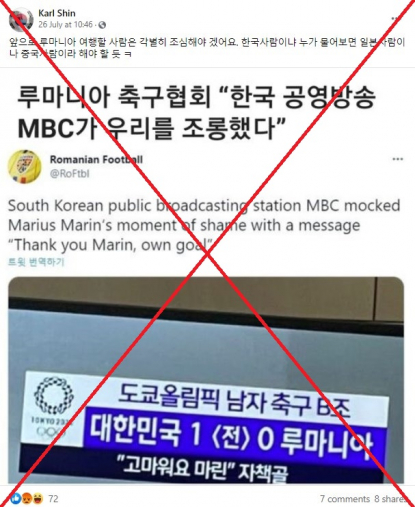 This was shared alongside a screenshot of a tweet from the Twitter username "RoFtbl", which reads: "South Korean public broadcasting station MBC mocked Marius Marin's moment of shame with a message 'Thank you Marin, own goal'."

MBC broadcast a caption saying "Thank you Marin," a reference to Romanian defender Marius Marin, who scored an own goal in an Olympics football match against South Korea, on July 25, 2021, according to Yonhap News Agency.

An identical screenshot with similar claims has been shared on Facebook here and here.

In response to a question, "Is this the official Romanian Football Association," the admin of the Twitter account said on July 26 2021: "No that would be FRF (FRF.ro)".

According to the official website of the FRF, or Federatia Romana De Fotbal, its official username on Twitter is "hai_romania".