Skip to main content
Afghan soldiers arrive outside a prison during an ongoing raid in Jalalabad on August 3, 2020. ( AFP / NOORULLAH SHIRZADA)

Multiple Facebook and Twitter posts have shared a photo that they claim shows the body of an Afghan man purportedly killed by the Taliban in 2021. The claim is false; the image has circulated online since at least 2015.

"This is the dead body of Afghan comedian Nazar Mohammed killed by taliban," reads the caption to this photo shared on Twitter on July 27 by Manzoor Pashteen.

Pashteen is founder of the Pashtun Tahafuz Movement, which campaigns for the rights of ethnic Pashtuns affected by Pakistan's war against the Taliban in its northwest.

Screenshot of the post with the false caption taken on July 30, 2021

Nazar Mohammad Khasha was a police officer and comedian on social media, who was killed by the Taliban in July, The Washington Post reported.

A reverse image search found an identical photograph posted here on Facebook on June 14, 2015 by the Afghan arm of US broadcaster Voice of America (VOA).

The VOA report states: "A number of residents of Shindand district of Herat protested against the increase in danger and the presence of armed Taliban in this district."

"With the transfer of four corpses in front of the office of the Governor of Herat, these people inform about the intensity of the war between Afghan security forces and the people affiliated with the Taliban group."

"They say in these conflicts, at least 5 residents including two women have been killed and 20 others have been wounded."

Below is a screenshot comparison of the image with the false caption (left) and the photograph posted by VOA (right): 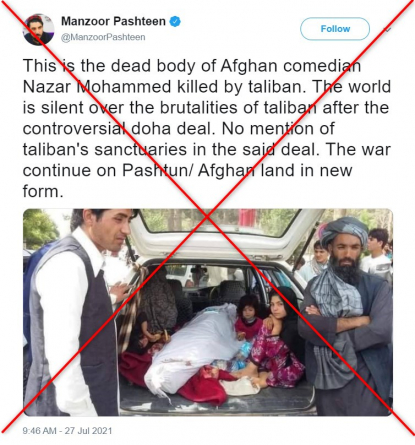 Screenshot of the photo shared on social media 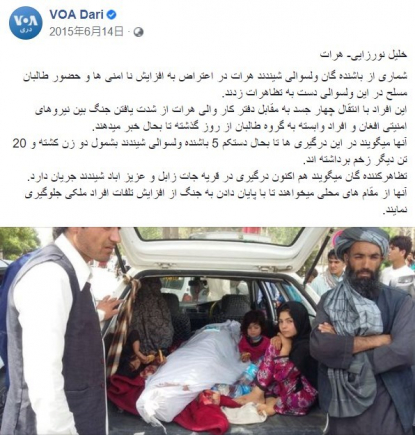 Screenshot of the photo in VOA's report

A representative for VOA said its photo had been shared in a misleading context.

"We can report to you that the body in the photo is not of the policeman you referenced in your email, but actually the photo shows the bodies of two Afghan women who were killed in an attack," the representative told AFP.