Skip to main content
Medical workers in protective gear deliver a baby by caesarean section at the RSIA Tambak maternity clinic in Jakarta, Indonesia on May 10, 2020 ( AFP / ADEK BERRY)

A photo of newborn twins appearing to hold hands has been shared hundreds of times in Facebook posts which claim a mother had a caesarean delivery as the "sister was holding her brother's hand tightly". The claim is misleading; the US hospital where the babies were born said the caesarean was a pre-planned procedure for the safety of the monoamniotic twins, not because they were holding hands. The twins are girls, not a boy and a girl as the posts claim.

"Instead of giving birth naturally, they had to do a caesarean section, because the sister was holding her brother's hand tightly," reads a Facebook post from July 1 shared more than 700 times. 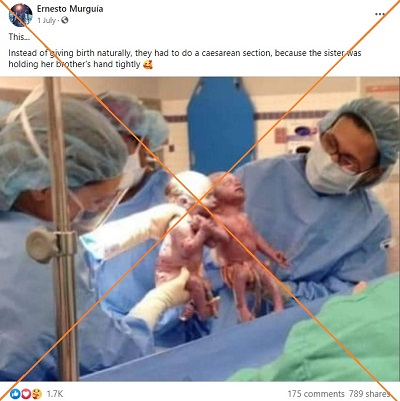 A Google reverse image search of the photograph led to this NBC News article from May 14, 2014, which features the same image.

The article, which features the headline, "Mom: Delivering Hand-Holding Twins Was 'Overwhelming'" reports that the babies -- who were both girls -- were "rare 'mono-mono' twins" born at Akron General Hospital after surviving a "risky pregnancy". 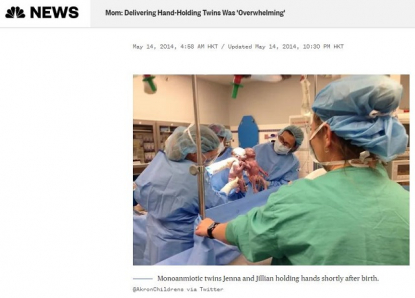 Various other media outlets such as ABC News and CBC/Radio-Canada also reported on the delivery of the "rare" twins.

A spokeswoman from Akron General Hospital in the US state of Ohio said the caesarean section was a pre-planned procedure and was not undertaken because the babies were "holding hands".

"The babies were rare mono mono (monoamniotic) twins. This is a pregnancy in which twins share the same placenta and amniotic sac. This only happens once in every 10,000 births", internal communications and public relations manager Amy Kilgore told AFP.

"The C-section was scheduled because the babies were monoamniotic twins. We didn't know they were holding hands until they were delivered."