NFL quarterback Mahomes did not threaten to leave over team name

A tweet claims a prominent sports journalist said Kansas City Chiefs quarterback Patrick Mahomes left training camp and threatened to stop playing in the National Football League unless his team changes its name. This is false; the reporter's network said he was not involved, and Mahomes participated in team training after the tweet's publication.

"BREAKING: Kansas City Chiefs QB Patrick Mahomes has left training camp and says he 'not play another down in the NFL' until the team changes their name," says a July 25, 2021 tweet attributing the report to Adam Schefter, an NFL analyst for cable broadcaster ESPN. 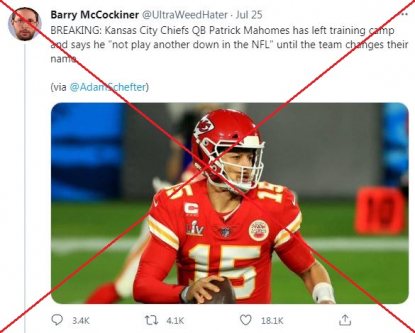 "I woke up this morning and literally started throwing up. I'm so disgusted with myself for playing for a team with a racist name. We must end racism right now. It's bad," a reply tweet from the same account said, supposedly quoting the NFL player.

The claim garnered thousands of likes and retweets on Twitter and also circulated on Facebook here and here.

It comes during  discussions at the Kansas City franchise about the team's traditions and rituals, and a national reckoning over racism, discrimination and cultural appropriation of indigenous imagery in US sports.

But ESPN spokeswoman Allie Stoneberg told AFP that the report did not come from the network.  "Adam (Schefter) has never reported this," she said.

Mahomes was also pictured taking part in training camp with his team on the day of the tweet and on July 28.

The Twitter account that posted the claim -- @UltraWeedHater -- later indicated that it was false, tweeting on July 26: "Reminder that a large majority of the people who fell for this tweet are allowed to vote."

The Kansas City Chiefs have been criticized over the team's name and stereotypical references to indigenous cultures. In 2020, the franchise made the decision to prohibit fans from wearing headdresses and "face paint that is styled in a way that references or appropriates American Indian cultures and traditions."

On July 26, Chiefs president Mark Donovan also said the team's horse mascot, called "Warpaint," would be not be returning.