An image showing a fawning message written by former South Korean Prime Minister Lee Nak-yon is circulating in Facebook posts which claim the note is about North Korea's leader. But the claim is false: the message was actually written by Lee as a tribute to late Vietnamese leader Ho Chi Minh during an official visit to Vietnam in September 2018.

The image and misleading claim were shared here on Facebook on July 28, 2021. 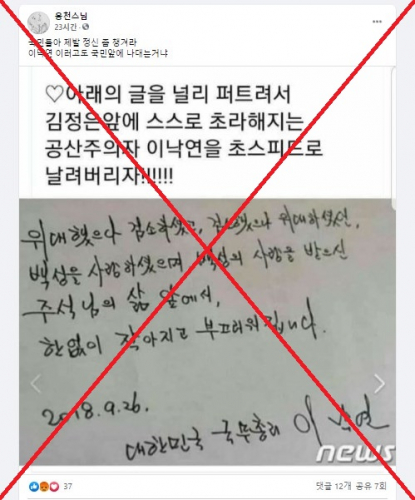 The image shows a message signed by "South Korean Prime Minister Lee Nak-yon" on September 26, 2018, that reads: "You were great, but humble, humble but great. You loved the people and were beloved by the people. In front of the premier's life, I feel endlessly small and ashamed."

The Korean-language caption above the image translates to English as: "Let's spread these words far, so that at light speed we get rid of the communist Lee Nak-yon, who has bent himself backwards in front of Kim Jong-un!"

The claim, which has circulated on social media since 2019, has resurfaced on Facebook in recent months, for example here, here, here and here.

Lee did not write this message about North Korean leader Kim Jong-un. It was actually written during an official visit to Vietnamese independence leader Ho Chi Minh's former residence in Hanoi, Vietnam.

The photo caption reads, in part: "A guest book message left by Prime Minister Lee Nak-yon after a visit to the residence of former Vietnamese Chairman Ho Chi Minh in Hanoi, Vietnam, on the 26th." The photo is dated September 26, 2018.

Below is a screenshot comparison of the photograph shared in the misleading post (L) and the original image from News1 (R):

After the misleading claim about the image began circulating on social media, Lee himself addressed the image on his verified Twitter account on May 26, 2019, calling the claim that it was about North Korea's leader "fake news."

"I took part in the funeral of Vietnam's state chairman on September 26 last year, then left the message in a guestbook after visiting former Chairman Ho Chi Minh's residence," Lee said.

Lee was referring to the state funeral for Vietnam's President Tran Dai Quang, who died in 2018 after an illness, AFP has reported.

In the Facebook post, which included a photograph of the message he left in the guest book, Lee wrote: "The residence of the father of the Vietnamese nation, the late Ho Chi Minh. [Ho] refused to live in the chairman's palace and lived a modest life in a fixed up residence that belonged to French electricians during the colonial era. I left my thoughts [in a message]."