The photo was shared here on Facebook on July 26.

It shows South Korean volleyball player Kim Yeon-koung alongside an image of a pair of yellow trainers, with a sticker attached that reads: "Long live Korean independence! 8.15".

The photo's Korean-language caption translates as: "Is she neglecting volleyball? Did she go to Japan to play volleyball or take part in an independence movement?" Korea was under Japanese rule until it was liberated on August 15, 1945, according to this website run by South Korea's culture ministry.

Comments to these posts indicate some social media users were misled.

"What a shameful thing [Kim] is doing in Japan. [South Korea's] Olympic athletes will be humiliated," one wrote.

"I will not support athletes who went to [Japan] to argue under the guise of the Olympics," wrote another.

The image of Kim's shoes predates the Tokyo Olympics and has circulated online since at least 2017.

The image was shared in this August 15, 2017 report by local media JoongAng Ilbo.

The report reads in part: "Volleyball player Kim Yeon-koung appeared in a volleyball match on Liberation Day on [August 15] wearing trainers with the phrase 'Long Live Korean Independence' written on them.

"This day South Korea was playing in the 19th Asian Senior Women's Volleyball Championship Round of Eight at Alonte in the Philippines." 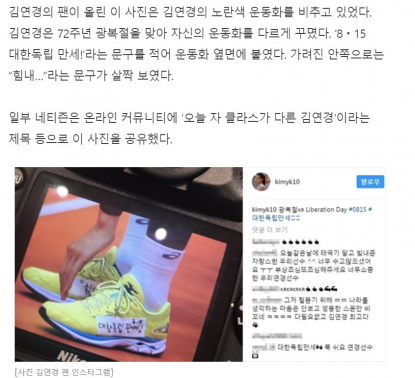 Screenshot of the JoongAng Ilbo report published on August 15, 2017

The photo was also shared in this news report by media organisation Dong-A Ilbo on August 16, 2017.

It has also been posted in online fan pages, for example here, since 2017.

In a television show broadcast by local network SBS on June 7, 2020, Kim explained why she put the sticker on her shoes.

"We were playing a national match, so we had to cover up the brand [on our shoes due to broadcasting rules]," Kim said.

"I did write the phrase ‘long live Korean independence’ on the sticker, which created some issues with Japan."