Skip to main content
In this photograph taken on July 16, 2021, fire dancers perform during the Esala Perahera festival in front of the historic Ruhunu Maha Kataragama Hindu temple as they take part in an annual procession in Kataragama. ( AFP / Ishara S. KODIKARA)


Social media users in Sri Lanka have shared an image that they claim shows the island nation's finance minister performing a fire walking ritual. The claim is misleading: the image actually shows a local police officer, according to individuals who took part in the ceremony.

The image -- which shows a man wearing a face mask while performing a fire walking stunt -- was shared here on Facebook on July 22, 2021.

The post's Sinhalese-language caption identifies the man as: "Finance Minister". 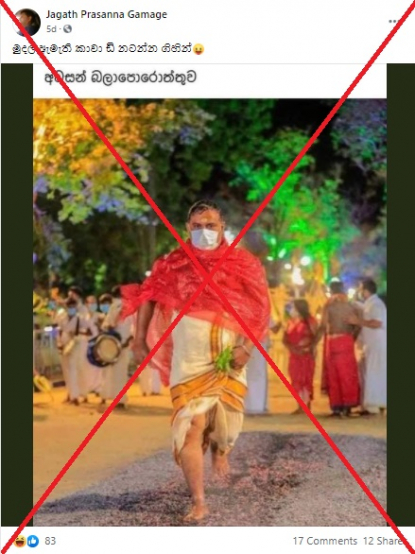 An identical image alongside a similar claim was also shared on Facebook here and here; and on Twitter here.

It was shared the official Facebook page of Ruhunu Maha Kataragama Dewalaya -- a Hindu and Buddhist temple complex in Sri Lanka.

"The annual fire walking ceremony of the Ruhunu Maha Kataragama Dewalaya was held this (21) morning," reads the photo's caption.

"Due to health concerns and restrictions, the event was held with the participation of a few devotees."

Nowhere in the post was the man identified as finance minister Rajapaksa.

Sandima Dewapriya, official photographer for the temple complex, told AFP the person in the image is a police officer named Karalahige Piyathilake.

AFP contacted Piyathilake, who confirmed he is the person shown in the image.

"I can confirm that it is my photo that is being shared claiming it is Minister Basil," he said.

Wimalarathna Liyanaarachchi, administrative secretary for the temple complex, told AFP: "I can say with certainty that Minister Rajapaksa was not part of the group that performed fire walking this year".