This footage shows an incident in Iran, not India

Footage that shows a person setting a fuel station pump on fire has been shared in Facebook and YouTube posts that claim it shows an incident in northern India following a nationwide hike in petrol and diesel prices. The claim is false: the video actually shows an incident in Iran.

"A man set a petrol pump station on fire in Haryana," reads a Hindi-language Facebook post from June 29. Haryana is a state in northern India.

"Due to high fuel rates in the country, this person decided to burn the entire station. However, workers at the station responded immediately and managed to douse the fire. This incident has created fear among locals."

The video emerged as petrol prices soared to reach record highs in Delhi. Many major cities around the country have also seen a spike in prices.

However, the claim is false; the video was filmed in Iran.

The videos are headlined: "Strange actions of a motorcyclist cause an accident at a gas station."

Below is a screenshot comparison of the footage shared in misleading social media posts (left) and in Iranian media (right).

"Colonel Aramoun, the head of the Rafsanjan police command, said, 'On the morning of June 10, a person on a motorcycle in the city of Rafsanjan set fire to a gas station and fled," the Persian-language report reads. Rafsanjan is a city in Kerman province in Iran.

Below is a screenshot of an image used in the story/ 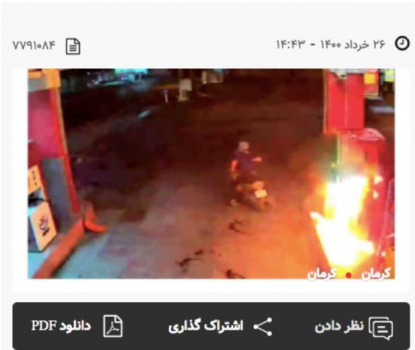 The same incident from the Rafsanjan fuel station was also reported by Iran’s official news agency, IRNA on June 26, 2021.

AFP matched the brand logo at the fuel station with the image of an Iranian fuel station from Rafsanjan city available here on Google.

An journalist at AFP's Tehran bureau said that the logo of the gas station belonged to the National Iranian Gas Company.