This footage is from a video game

A video has been viewed tens of thousands of times in Facebook, Twitter and Weibo posts claiming it shows an interview with a human robot. The claim is false: the footage was taken from a promotion for the video game "Detroit: Become Human" which was released in 2018.

The video shows an interview with a "robot" who introduces herself as Chloe.

"I'm the first personal assistant built by Cyberlife. I take care of most everyday tasks like cooking, housework or managing your appointments," she says, smiling. 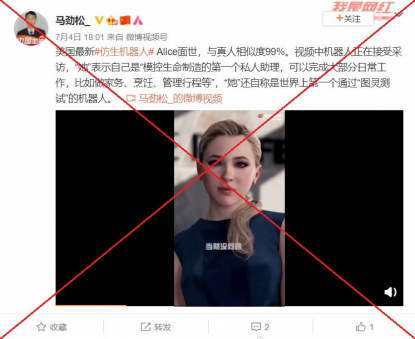 Similar posts have been circulating on social media since at least 2019, including here, and recently resurfaced here on Weibo, here on Facebook and here in a video viewed more than 80,000 times on Twitter.

However, the claim is false. The footage does not show a robot -- it is a promo for a video game.

A keyword search on Google found a longer version of the clip posted on PlayStation Europe's YouTube channel on May 23, 2018.

The video circulating on social media has been taken from the 11-second timestamp of PlayStation's video.

According to PlayStation's website, Detroit: Become Human is an adventure video game released in 2018 and developed by game company Quantic Dream.

"Set in Detroit City during the year 2038, the city has been revitalized by the invention and introduction of Androids into everyday life," the game description reads. "But when Androids start behaving as if they are alive, events begin to spin out of control."

The same video was also debunked by India-based news site The Quint here.