A video of two girls showering rose petals on a motorcade has been shared on Facebook alongside a claim that they were expressing love for the Pakistan army. The claim is false: the video has circulated in reports about two girls greeting a motorcade for the Jordanian police and military.

The post's Urdu-language caption translates to English as: “Is there anybody who will share this video?”

As the girls throw the rose petals, the motorcade stops and an officer approaches to sprinkle rose petals on them. 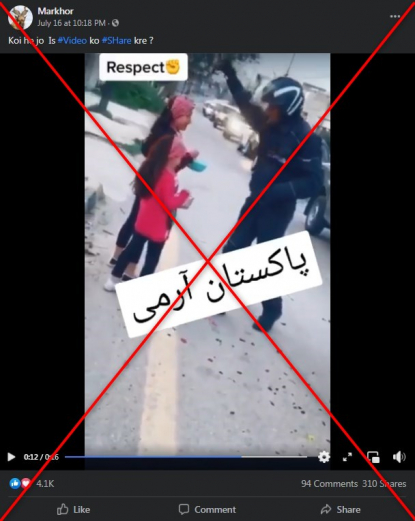 The same video was shared on Facebook here, here and here alongside a similar claim.

A reverse image search of the keyframes of the video on Google found the same video published in this report here on April 3, 2020 by Jordanian news outlet Roya News.

It is about two young Jordanian girls welcoming a motorcade of the Jordanian police and military.

The video's caption reads: "Two young girls express their love to police, army by spreading rose petals on their vehicles."

The report reads in part: "With love and flowers, this is how two young Jordanian girls welcomed the police and Jordan Armed Forces (JAF) members who passed by their place of residence a couple of days ago."

"In a video posted on Roya TV official Facebook page, that received millions of views, reactions, and comments, the girls appear spreading rose petals at the police and army vehicles, as a way to express their love and appreciation to their efforts in keeping the country safe amid these exceptional circumstances, as a curfew has been imposed in the Kingdom for nearly two weeks due to the spread of coronavirus in the country." 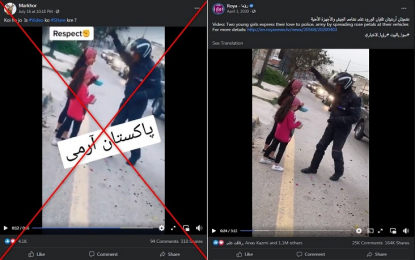 The same video was also shared by multiple social media accounts in Jordan, including a verified Jordanian Twitter account here.

They all state it shows a motorcade of the Jordanian police and military.