This photo does not show a 'collapsed' dam in central China

As floods devastated the central Chinese province of Henan, a photo circulated online alongside a claim it shows a "collapsed" dam in the provincial capital of Zhengzhou. The image, however, has been shared in a misleading context: the photo -- captured by an AFP stringer -- shows water being released from another dam situated about 160 kilometres from the named reservoir.

"The Guojiazui Dam in Communist China, the third to collapse," reads the photo's Korean-language caption shared here on Facebook, on July 22, 2021. 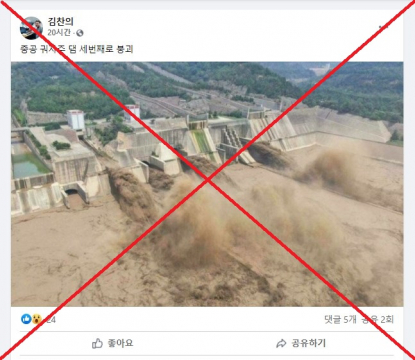 Guojiazui reservoir is located near the city of Zhengzhou, which suffered devastating floods in late July 2021.

It reads in part: "According to local media reports, Guojiaju (sic) dam in central China’s Henan province has been collapsed by severe flooding."

A reverse image search found the original photo published in this AFP article on July 20, 2021.

The original AFP image can be seen below:

The photo's description reads: "This aerial photo taken on July 5, 2021 shows water being released from the Xiaolangdi Reservoir Dam in Luoyang in China's central Henan province."

Below is a screenshot comparison of the photograph shared in the misleading post (L) and the original image from AFP (R):

Screenshot comparison of the photograph shared in the misleading post (L), and original image from AFP (R)

The Xiaolangdi Reservoir Dam is located on the main stream of the Yellow River -- around 40 kilometres north of Luoyang city in Henan province.

AFP reported that this reservoir was damaged by flooding in late July 2021.

English-language publications from China's Ministry of Water Resources include the reservoir's location here and here,

The Guojiazui reservoir is situated about 160 kilometres from the Xiaolangdi Reservoir Dam.

"[Authorites] reported a large-scale collapse in the downstream slope of the Guojiazui Reservoir in Zhengzhou, but no dam break has been detected yet", according to an English-language Twitter post on July 21 from CGTN Global Watch, a Chinese state-run media outlet.

The tweet also included a CGTN news clip showing footage of damage at the Guojiazui reservoir: 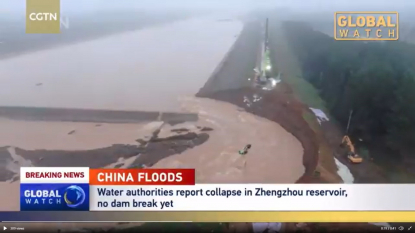