An image of a large crowd has been shared repeatedly on Facebook and Twitter alongside a claim it shows mourners flouting Covid-19 restrictions at the funeral procession of a Reuters news agency photojournalist in July 2021. The claim is false; the photo shows an Islamic procession in Bangladesh in 2019.

Danish Siddiqui, a Pulitzer Prize-winning photographer with Reuters news agency, was killed on July 16 covering fighting between Afghan security forces and the Taliban near a border crossing with Pakistan. 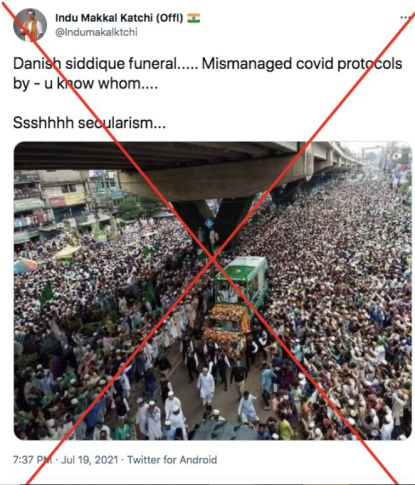 The photo was also shared here and here on Facebook alongside a similar claim.

The photo corresponds with the scene in this photo shared on Facebook on November 26, 2019.

It was uploaded by photographer Faisal bin Latif in a post about a religious procession in the Bangladeshi city of Chattogram. 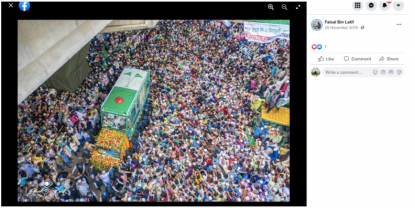 AFP found a similar video here on a Bengali-language YouTube channel showing a scene that corresponds with the image in the misleading posts.

The video's title states that it shows the Miladun Nabi procession in Chattogram in November 2019.

Miladun Nabi is an Islamic festival observed by Muslims as Prophet Mohammed’s birthday according to the Islamic calendar.

In 2019, the festival was celebrated on November 10 in Bangladesh.

Below is a screenshot comparison of the photo in the misleading post (L) and YouTube video's one-minute 17-second mark (R):

The same procession was also reported by Bengali news website Banglanews24.com on November 10, 2019.

AFP found a similar structure pictured in the news story (L) with the YouTube video (R):

Below is this genuine photo of Danish Siddiqui’s funeral procession, captured by AFP photographer Money Sharma.

The caption reads: "Mourners carry the casket of Reuters journalist Danish Siddiqui (R) before his burial in New Delhi on July 18, 2021." 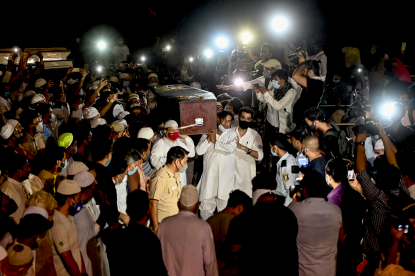 Mourners carry the casket of Reuters journalist Danish Siddiqui (R) before his burial in New Delhi on July 18, 2021, after the Pulitzer Prize-winning photographer with Reuters news agency was killed covering fighting between Afghan security forces and the Taliban near a border crossing with Pakistan, an Afghan commander said. ( AFP / Money SHARMA)