Philippine boxing legend and Senator Manny Pacquiao training at his gym in the city of General Santos in southern island of Mindanao on June 22, 2021 ( AFP / TED ALJIBE)

Social media posts in the Philippines claim boxer-turned-senator Manny Pacquiao earned his university diploma in only three months, suggesting his degree was fraudulently conferred. The posts are misleading: an official from the University of Makati, where Pacquiao obtained a political science degree, said he finished the diploma in 16 months and that his government experience counted as academic credit. The misleading posts also misrepresent images related to Pacquiao's university attendance.

The tweet features an illustration which claims Pacquiao enrolled at the University of Makati in September 2019 and then graduated three months later in December 2019. 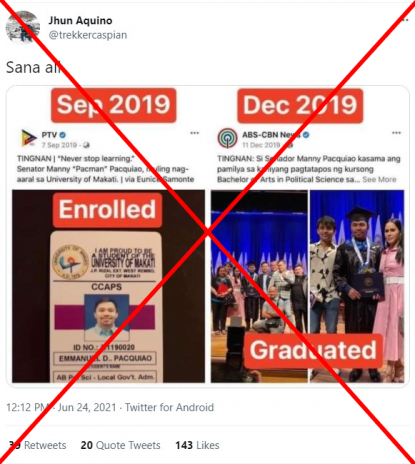 "Bachelor of Science in most courses is 4 to 5 years schooling. . . . seems Pacquiao earned his degree by magic or in a diploma mill," one person commented.

The post emerged following a public skirmish between Pacquiao and President Rodrigo Duterte over the latter's handling of the South China Sea dispute with Beijing.

Until recently, Pacquiao was a high-profile backer of Duterte and his controversial drug war, which International Criminal Court prosecutors want to investigate for the alleged unlawful killing of possibly tens of thousands of people.

However, the posts claiming Pacquiao earned his degree in three months are misleading.

A spokesman for the University of Makati said that Pacquiao took a 16-month degree in political studies.

"Per the certificate of registration from our registrar's office, [he enrolled in] July 2018," Elyxzur Ramos, vice president for academic affairs at the University of Makati, told AFP.

"He took the modular program for 16 months, until November 2019. He graduated from this university in December [2019], which was our mid-year graduation."

The political science degree that Pacquiao earned was designed for qualified Philippine government officials and can be completed in between six and 22 months, he added.

The degree programme's launch in 2011 was reported by local media here and here; and announced on this local government website.

Furthermore, the images shared in the social media posts have been taken out of context.

However, it does not indicate that the senator had only just enrolled, as the posts claim.

The second image, which shows Pacquiao's graduation, was taken from this report by broadcaster ABS-CBN on December 11, 2019.

"Senator Manny Pacquiao with his family during his graduation from the course Bachelor of Arts in Political Science at the University of Makati this Wednesday,” the image's Tagalog-language caption reads.