Cuban president did not 'announce resignation' immediately after anti-government protests

After thousands of Cubans marched in anti-government protests, Chinese-language social media posts claimed that President Miguel Diaz-Canel announced he would resign in a televised broadcast on July 17. The claim is false: Diaz-Canel criticised what he said was a "false narrative" of the unrest, but did not say he would step down. As of July 26, 2021, he was still serving as Cuba's president.

"Full launch of political deepening and economic reforms, new foreign relations policy, free elections in the country, and participation of the Cuban Communist Party in the election of congressmen as a political party. This means Cuba has been released from its one-party dictatorship."

In mid-July 2021, thousands of Cubans joined anti-government protests in 40 cities. AFP reported on the unrest here.

A keyword search on Google found a transcript of Diaz-Canel's speech on July 17.

It was published here on the president's official site. 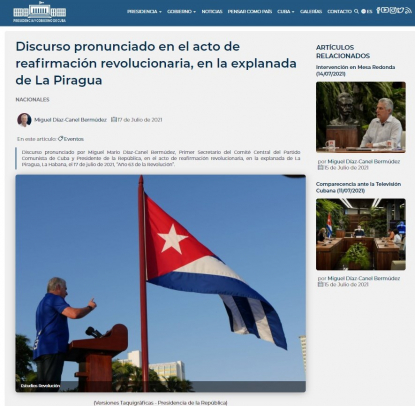 At the rally, he decried what he said was the dissemination of "false images" on social networks that "glorify the outrage and destruction of property."

"What the world is seeing of Cuba is a lie," he said

Diaz-Canel did not announce he would resign from office.

As of July 26, he remained in power. AFP found no credible news reports about his purported resignation.