Footage of panicked factory workers running has been viewed thousands of times in Facebook, Instagram and YouTube posts that claim it shows employees at Malaysia's Top Glove — the world's largest glove manufacturer — fleeing a police raid after being banned from operating under Covid-19 lockdown rules. But the claim is false. The video has circulated online since 2019, months before Malaysia reported its first Covid-19 cases. It actually shows workers at a chicken processing factory running away from an ammonia gas leak.

The footage shows people wearing orange and green uniforms, and some people in white lab coats, scattering and running while someone off camera can be heard urging people in Malay to run. 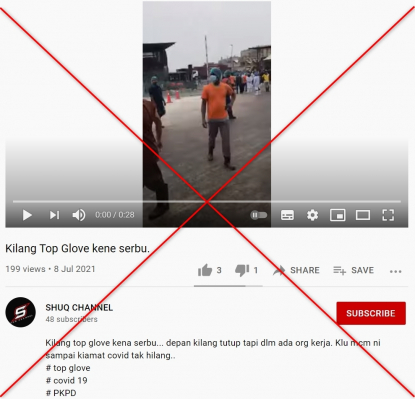 The caption says: "Top Glove factory is raided... the front of the factory is closed but inside there are people working. If like this until doomsday covid will not go away…"

Malaysia is under lockdown to reduce spiralling cases of Covid-19. The government has said only some key industries are allowed to operate, according to local media reports here and here.

Factories — including Top Glove, the world's largest glove manufacturer which shot to prominence during the Covid-19 pandemic for their work producing the rubber gloves needed by medical professionals — have had to halt operations under the restrictions, according to a local media report here.

The video has been viewed more than 19,000 times after it appeared with a similar claim on Facebook here, here and here; on Instagram here; and on YouTube here and here.

However, the claim is false: the video has circulated online since at least September 2019 and does not show a Top Glove factory.

The video, uploaded on September 3, 2019, features same scenes as seen in the footage in the misleading posts, starting from the 0:12 mark.

Translated to English, the post's caption says: "26 Treated at Hospital

"To date, 26 people, including factory workers, have been admitted to Jasin Hospital and Malacca Hospital for treatment following an ammonia gas leak from a chicken processing plant in Serkam, Jasin, Melaka.

"The Central Melaka District police chief, Assistant Commissioner Afzanizar Ahmad, confirmed that the incident around 11:30 this morning was caused by one of the pipes in the freezer room, which contained the gas, leaking."

Jassin is a district in Malaysia's Melaka state.

Below is a screenshot comparison of the video from the misleading post (L) and the TV3 video report (R):

Malaysia reported its first Covid-19 cases in January 2020, as reported here and here.