A screenshot of a purported news report from South Korean broadcaster Seoul Broadcasting System (SBS) about the link between a person's beauty and body temperature has been shared repeatedly on social media. The image, however, has been doctored to include a false headline. A spokesperson SBS told AFP the network has never broadcast the purported segment. 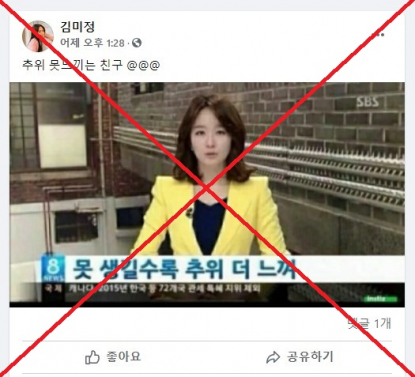 The image appears to show a purported news report from SBS, a major broadcasting company in South Korea.

The Korean-language headline translates to English as: "The uglier [you] are, the colder [you] feel".

The image has circulated on social media in South Korea since at least 2015, according to reverse image search engine TinEye.

One post on Naver Blog, a popular social media platform in South Korea, claimed the image was "a real report broadcast by SBS in 2014."

The graphic was also shared on Facebook here, here, here and here alongside a similar claim.

Many users on Facebook appeared to believe the report was genuine.

"Now that I see it there was a reason why I feel so cold," wrote one user. Another wrote, "This, this is real? I must be ugly since I feel cold all the time."

The image, however, has been doctored to include the fabricated headline.

In the original news clip, SBS ran an unrelated story about three robbers who broke into a residence in the South Korean capital of Seoul.

Below is a screenshot comparison of the doctored image (L) and a screenshot of the genuine news report from SBS (R):

Screenshot comparison of the doctored image (L) and a screenshot of the genuine news report from SBS (R).

A spokesperson for SBS told AFP in an email on July 16, 2021, that the image did not represent a genuine news report run by the network.

"After fact-checking the report in question, [we can say] SBS never ran a report about such a topic," said the spokesperson.