This video shows flooding in China’s Bazhong city, not Chengdu

A video has been viewed thousands of times in Twitter posts that claim it shows the flooding in Chengdu, a city in southwest China. The claim is false: the video actually shows flooding in a village in China's Bazhong city, which is more than 300 kilometres northeast of Chengdu.

"Chengdu is now a city full of water," reads the Chinese-language caption in this Twitter post on July 12, 2021.

The video has been viewed more than 9,000 times.

Chengdu is the capital city of China's southwestern Sichuan province.

The video shows an aerial view of a flooded street.

A fire engine can be seen moving slowly towards a man standing on the roof of a car submerged by water.

A woman can be heard speaking in a local dialect from the southwest part of China. 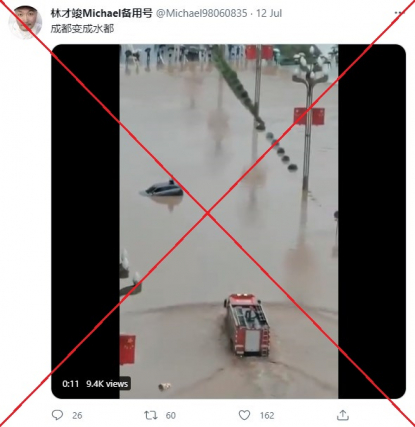 The video was also shared such as here and here on Twitter alongside a similar claim.

The video actually shows flooding in a different city in Sichuan Province, not Chengdu.

A keyword search on Twitter and Chinese social platform Weibo found the same video published by the official Weibo account of a fire department in the southern Chinese city of Bazhong on July 10, 2021.

Bazhong is also a city within Sichuan province, located more than 300 kilometres northeast of Chengdu.

The Weibo video's simplified Chinese-language caption translates to English as: "On July 10, there was a rainstorm in Bazhong, and one person was trapped on the roof of Xiejiaheba village in Tongjiang county due to flooding. After receiving the call, Sichuan Bazhong Fire Department rushed to the scene and rescued the trapped person."

The same footage shared in misleading posts can be seen from the beginning of the Weibo video.

Below are two screenshot comparisons of the video shared in the misleading posts (L) and the Weibo video from the fire department of Bazhong (R): 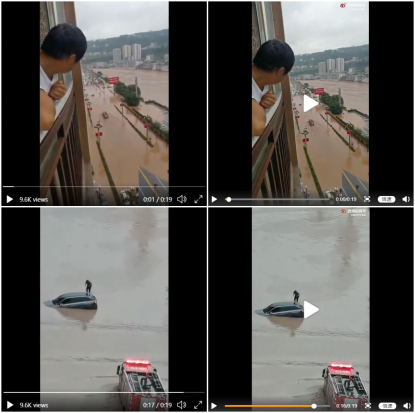 Both media sites reported on the same rescue incident in Bazhong.