After the death of veteran Bollywood actor Dilip Kumar on July 7, Facebook and Instagram posts claimed the star’s family donated all his property to Islamic charitable causes. The claim is false, his manager Faisal Farooqui told AFP. The board overseeing such charitable donations in Kumar's home state of Maharashtra said no such grant had been made.

“Those who are crying over the demise of Mohammed Yusuf aka Dilip Kumar, open your eyes, he donated all his property to the Wakf Board and not to any temple,” reads a Facebook post published on July 8.

Under Islamic law, Wakf is property given in the name of God for religious and charitable purposes. India has a Central Waqf Council and individual states have Waqf boards that oversee this process and waqf properties.

Mohammed Yusuf Khan was Kumar's birth name, before he adopted his Hindu stage name. Here is an Urdu-language interview in which he explains why he took this step.

He enjoyed a career that spanned more than 50 years and acted in nearly 60 films, including some of the most commercially successful hits of Indian cinema's golden age from the 1940s to the 1960s. 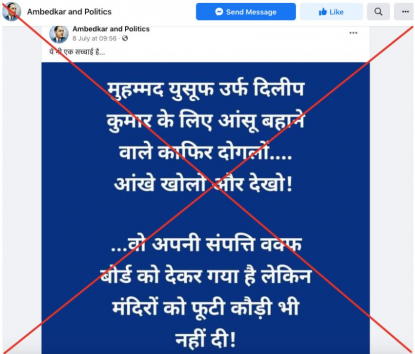 Some versions of the misleading claim, for example here on Twitter, specified that the property Kumar had purportedly donated was worth some 98 crore rupees (13 million USD).

The misleading tweet says: "Understand the chronology of the Muslims: Dilip Kumar's real name was Mohammed Yusuf Khan, but he changed his name and earned a lot of money. But at the time of his death, he did not gave away his 98 crore worth property to any NGO, orphanage or an old age home but to a Muslim religious institution Wakf Board."

"There is absolutely no truth to these claims. They are false claims from fake social media accounts. I am firmly denying these claims about a 98 crore donation," he told AFP.

The CEO of the Maharashtra State Wakf Board -- which is responsible for wakf in Mumbai, where Kumar lived and died -- told Indian fact-checking website Boomlive that no such grant had been made by Dilip Kumar or his family.

No mainstream Indian media have published reports about Kumar donating his property to a Muslim body.