A picture that purports to show the Moon above the Sun has been shared thousands of times in multiple Facebook posts that claim it shows a real sunset at the North Pole. The claim is false: the image has been digitally created by an artist. It has circulated online in misleading posts since at least 2006.

The image was shared here on June 7, 2021 by a Facebook page based in New Zealand. 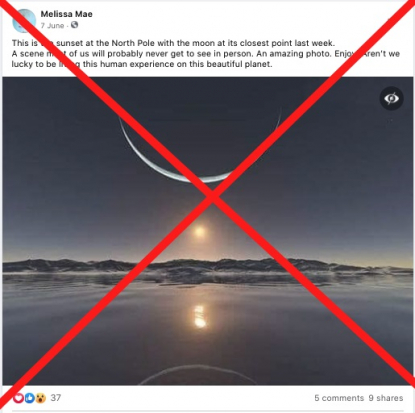 The post's caption reads: “This is the sunset at the North Pole with the moon at its closest point last week. A scene most of us will probably never get to see in person. An amazing photo. Enjoy!”

The image has been shared thousands of times alongside a similar claim on Facebook pages around the world, including Britain, Italy and the United States.

She creates artworks under her online pseudonym Gate to Nowhere and uploads them here on the art-sharing website Deviant Art. 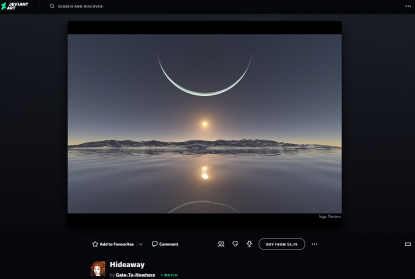 A screenshot of the original artwork. ( AFP)

The original image was created using Photoshop and digital landscape rendering software Terragen, according to Nielsen's caption on the original Deviant Art image.

“After someone spread it on the web as [sic] photograph of a ‘Sunset at the north pole’, this image became quite popular. It is of course not a photo and it does not show a place anywhere near the terrestrial North Pole,” the caption reads.

NASA featured 'Hideaway' as its Astronomy Photo of the Day.

It debunked the claim the image showed a sunset at the North Pole, after it initally circulated online in misleading posts in 2006.

“The scene could not exist anywhere on the Earth because from the Earth, the Moon and the Sun always have nearly the same angular size,” the NASA website reads.

In 2011, astronomer Phil Plait also published this story in Discovery Magazine debunking claims that the image shows a sunset at the North Pole.

In this Facebook post sharing the Discovery Magazine article, Nielsen confirmed the image was never intended to be a sunset on Earth. "This is an alien world thousands if not millions of light years away," she wrote.