Facebook posts and TV shows in South Korea have for years recommended that people should apply a plaster below their navel in order to lose weight. The claim is false: medical experts said there is no evidence that wearing plasters can help weight loss.

It is headlined: "A shocking change that happens if you apply a plaster under your navel!" 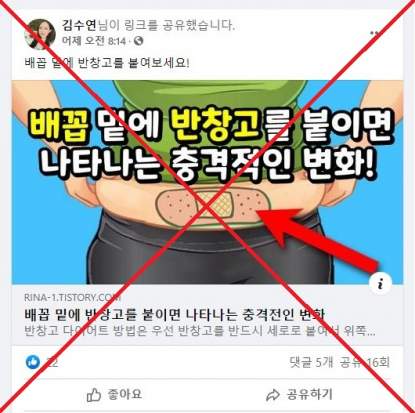 "You must apply the bandage vertically [below your navel] so that it pulls [the skin] from the top," the Tistory article reads. "Once you feel the pull, it will stimulate a meridian and you will sufficiently feel the results. You must keep the bandage on for at least two or three days a week."

Similar claims have circulated online in South Korea since at least 2017, such as in this YouTube video.

KBS 2TV, a South Korean broadcaster, also included a similar claim in a television show broadcast on May 14, 2018.

Meridians -- or acupuncture points -- are a concept in traditional East Asian medicine. The term refers to areas in the body that are stimulated using needles, pressure or heat in order to resolve a clinical problem.

However, medical experts told AFP the claim has no scientific basis.

"Not only is there no evidence to support the claim, but the method also explained stands in contrary to our understanding of weight loss," said Professor Oh Sang-woo, an expert in obesity and family medicine at Dongguk University Ilsan Hospital.

"In order to suppress the hunger drive and achieve weight loss, the correct method is to slow down digestion and bowel movement, not enhance it," he told AFP. "This is how some of the latest medicines used for weight loss work."

Oh said there were "certain cases" where stimulating a person's skin could affect digestion due to the body's autonomic nervous system, but added that "such functions won't be affected by applying something like a skin plaster underneath your navel".

Professor Kang Jae-heon, an expert in obesity at Kangbuk Samsung Hospital, said the purported technique might be based on a placebo effect.

"Even in traditional Korean medicine, meridians are stimulated using tools like needles or by applying pressure, but this claim involving a skin plaster does not even fit into that category," he told AFP. "To put it simply, the claim may be circulating because it is an inexpensive and easy method to try, but there is no evidence to support it."

Kang also said that faster digestion did not necessarily contribute to weight loss.

"While it depends on how fast the body is able to digest, faster digestion could lead to faster absorption of nutrients and actually contribute to weight gain, not loss," he said. "In any case, there is little ground to suggest that better bowel movements or digestion helps with weight loss."

A spokesperson for Box Media, a media production company that promoted the claim on a television show aired on KBS, told AFP that although the show's producers no longer worked at the company, they "likely consulted experts and verified the information before airing it at the time."