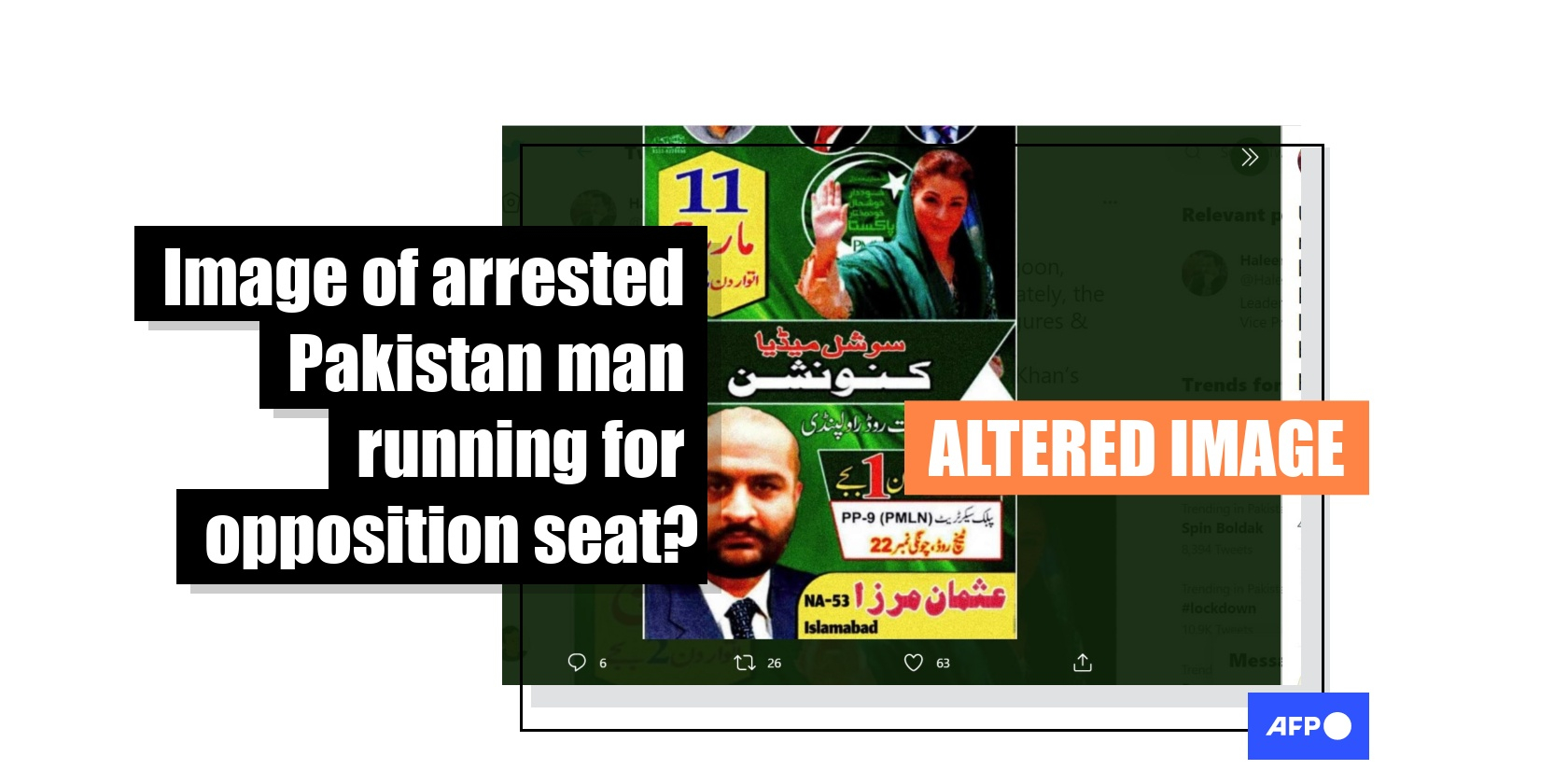 An image shared multiple times on Facebook and Twitter purports to show a Pakistan opposition party will put forward a man recently arrested for harassment to contest a seat in Pakistan's National Assembly in the capital Islamabad. The claim is misleading: the image has been doctored to add the man's face in one of the opposition party's campaign posters from 2018.

The image was posted here on Twitter by Haleem Adil Sheikh, leader of the opposition in Sindh province, on July 10, 2021.

The post’s caption reads: “Usman Mirza, the known rapist & a certified goon, belongs to none other than PML-N. Unfortunately, the likes of him have long hidden behind powerful figures & parties, believing they’re above the law. No more. Not in Naya [new] Pakistan. Not in Imran Khan’s Pakistan.”

Usman Abrar -- also known as Usman Mirza -- is a businessman who was recently arrested for allegedly harassing and beating a couple in Islamabad, local media outlet Dawn News reported here.

The image purports to show Mirza’s face on a campaign poster for the Pakistan Muslim League-Nawaz (PML-N) party. It indicates Mirza will contest a seat in elections in Islamabad.

The photo was also shared here on Twitter by Kanwal Shauzab, a minister of the ruling Pakistan Tehreek-e-Insaf (PTI) party.

The image, however, has been doctored to include Mirza.

It shows a member of the PML-N and former minister in the Punjab provincial assembly, Chaudhry Muhammad Ayaz---  not Usman Mirza.

Below is a screenshot comparison of the doctored image (L) and the original image (R):

Screenshot comparing the altered image (L) and the original (R) with the swapped faces circled in red by AFP. Taken on July 14, 2021.

Pakistan's last National Assembly elections were held in 2018. The next national elections are scheduled for 2023.

According to both versions of the original 2018 poster, a PML-N rally was scheduled on "11 March, Sunday 2 o'clock" at "Fawara chowk, Liaqat road, Rawalpindi".

This corresponds with reports of a PML-N rally held on Sunday, March 11, 2018.

She also tweeted about the rally here.

This is people's love for Nawaz Sharif ❤️ https://t.co/4WAsyTJvDe