Following the death of former Philippine President Benigno 'Noynoy' Aquino III from kidney failure in June 2021, multiple YouTube and Facebook posts shared a video that they claimed showed "secret actual footage" of him being murdered. The claim is false: the video in fact shows unrelated footage about a drugs bust in the US that has circulated online since December 1997. Aquino's family has confirmed he died from kidney failure.

It purports to show CCTV footage of a man exiting a small room. 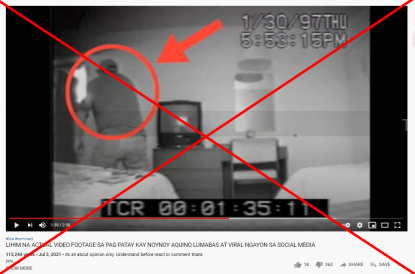 The misleading post circulated online one week after the death of former Philippine President Benigno “Noynoy” Aquino III, the country’s leader from 2010 to 2016.

An identical video was also shared alongside a similar claim in Facebook posts here, here and here.

A reverse image search on Google found the screenshot of the CCTV footage has been taken from this 46-second clip. It was uploaded to the website for Getty Images news agency on December 3, 1997.

"Riley produces a gun and shoots informant Bartels in the shoulder, advancing to fire again when his gloved hand catches in the trigger, allowing FBI, monitoring the proceedings in an adjoining room, to make entry, fatally shooting Riley in the process."

The clip was recorded on January 30, 1997, according to the timestamp seen on the video keyframe's top right-hand corner.

The screenshot used in the misleading post corresponds to the 11-second mark of the drug bust footage.

The drugs bust was cited in this decision by an appeals court in the US state of Missouri on December 1999.