A photo of an old man chained to a bed has been shared hundreds of times in multiple Facebook posts that claim it shows the final moments of a detained Indian rights activist and Jesuit priest before he died in early July 2021. The claim is false: the photo has circulated in reports since May 2021 about a 92-year-old prisoner being treated at a hospital in the north Indian state of Uttar Pradesh.

The post’s caption translates to English as: “What a different scene than what we have lived under the rule of such a deadly monster. Deep condolences to 84-year-old late social activist Stan Swamy.”

Father Stan Swamy was an 84-year-old rights activist and Jesuit priest who died in hospital on July 5, 2021. He had been imprisoned for nine months without trial under Indian anti-terrorism laws.

The photo was also shared here and here on Facebook alongside a similar claim.

A reverse image search on Google found the original photo was published here by Indian news outlet NDTV on May 13, 2021.

The report states it shows a 92-year-old prisoner being treated in a hospital in the north Indian state of Uttar Pradesh.

The report reads in part: “A jail official was suspended on Thursday for chaining a 92-year-old prisoner to his hospital bed during treatment in Uttar Pradesh's Etah district, the authorities said.”

The photo's caption reads: "Baburam Singh, a convicted murderer, was taken to the hospital due to breathing issues."

The prisoner is named in the report as Baburam Balwan Singh. 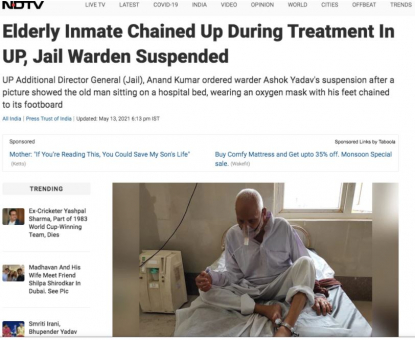 Below is a screenshot comparison of the photo in the misleading posts (L) and the NDTV photo (R): 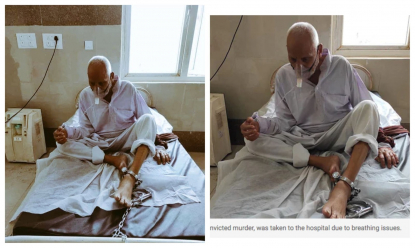 The story was widely reported alongside the same photo by various Indian news websites in May 20201, including by Times of India and India Today.

Below is a screenshot of a photo of Stan Swamy from the Times of India website published on July 5, 2021: 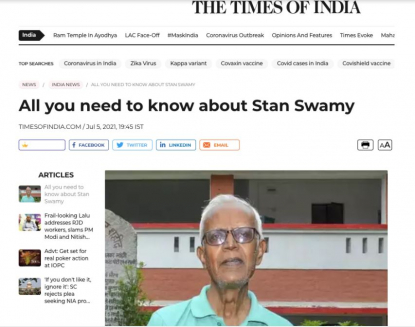