Misleading posts cause confusion on Japan immigration rules ahead of Olympics


As Japan beefed up coronavirus restrictions ahead of the Tokyo Games, social media posts claimed the Olympics host had banned entry for citizens from seven countries, including Thailand, Cambodia and Sri Lanka. The posts are misleading; nationals from more than 150 countries are barred from entering Japan unless they have "special exceptional circumstances", the foreign ministry said.

"I am screaming! I can't fly to watch the Olympics anymore. Japan announced that anyone coming from these seven countries is forbidden to enter Japan," the Facebook post reads.

The picture shows the flags of Thailand, Cambodia, Mongolia, Sri Lanka, East Timor, the Seychelles and St. Lucia, alongside text that reads "7 countries that are banned from entering Japan!!!" 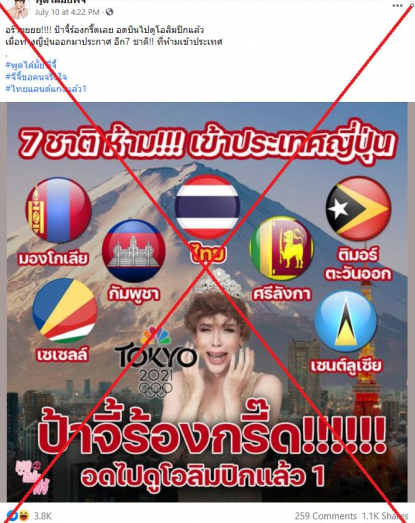 The posts appeared to cause confusion among Facebook users, who asked why countries like Brazil and India -- which have seen some of the world's highest numbers of Covid-19 cases -- were not on the list.

"Brazil and India can enter?" one person wrote.

"Even India is not on the list, you guys should be embarrassed," another said.

Japan declared a virus emergency ahead of the Games -- set to take place largely behind closed doors -- amid a spike in infections in Tokyo.

However, the posts claiming Japan has banned entry for citizens from seven countries are misleading; foreign nationals from more than 150 countries are not allowed to enter the country, as of July 14.

According to Japan's Ministry of Foreign Affairs's website, foreign nationals from 159 countries are denied entry. 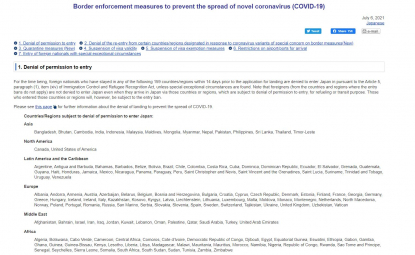 Japan's Ministry of Justice said in a statement on June 28 that foreign nationals would be "subject to denial of landing" unless "there are special exceptional circumstances."

Special exceptional circumstances include foreign nationals entering Japan with a re-entry permit, spouses or children of a Japanese nationals and permanent residents and foreign diplomats or officials, the government said.