An image of actor Ryan Reynolds holding a t-shirt with a message criticizing Canada's Conservative Party is being shared in posts on Facebook. The image is doctored; the original photo is of American musician George Strait holding a country-themed t-shirt.

"Ryan nails it," says a July 7, 2021 Facebook post that includes a photo of the Canadian-born star posing with a t-shirt featuring the slogan: "Are you a Canadian or a Conservative." 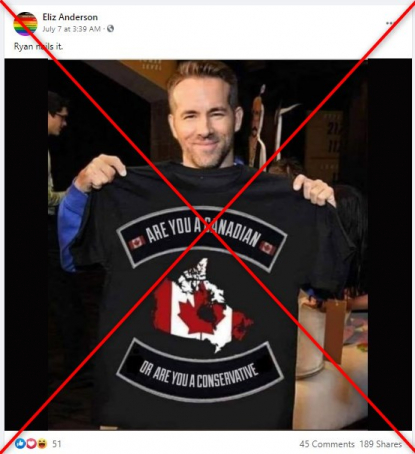 This is not the first time an altered image featuring Reynolds appeared in political posts in Canada. Ahead of the 2019 federal election, AFP Fact Check debunked similar doctored images that circulated with messages targeting the Liberal Party.

At the time, AFP found the original photo on the Getty Images website here. It shows the country music star holding a t-shirt that said: "Straight Shootin' Country Boy" at the 48th Annual Academy of Country Music Awards in Las Vegas in April 2013.

These side-by-side comparisons show that Strait’s hands, and several items in the background, appear in both images. 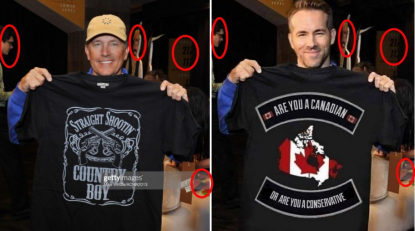 A combination of screenshots taken on July 12, 2021. The image on the left of George Strait was taken by Mike Windle on April 7, 2013 and is found on the Getty Images website

AFP spoke with photographer Mike Windle in 2019 and he said: "If you look closely to the faked images, there is still a remnant of the Getty watermark in the lower right hand of the frame."

He said that "the image is a prime target for manipulation" in part due to the ease of "modifying the graphic on the t-shirt."

A reverse image search in Google reveals that Reynolds is among a series of Hollywood stars, including Johnny Depp and Harrison Ford, who have been added to the image.