After one of Bollywood's most respected film stars Dilip Kumar died in early July 2021, Facebook and Instagram posts shared a video they claimed shows his final moments in hospital before he passed away. The claim is false: the footage was recorded in September 2013, after Kumar suffered a heart attack.

It shows Kumar in a hospital bed while his wife -- veteran actress Saira Banu -- feeds him. 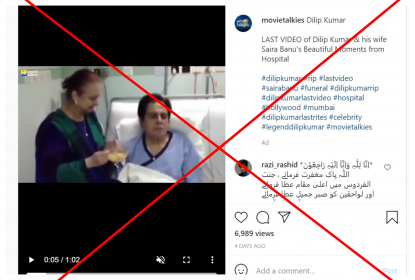 His death sparked tributes from across Indian and Pakistani cinema, politics and sport.

He enjoyed a career that spanned more than 50 years and acted in nearly 60 films, including some of the most commercially successful hits of Indian cinema's golden age from the 1940s to the 1960s.

The video was shared alongside a similar claim on Instagram and Facebook, including here, here and here.

The post's caption reads: "Thank you for your prayers and love. Resting in the hospital. Video from yesterday." A screenshot from the video was featured in a news report about Kumar 's hospitalisation here by NDTV.

According to a separate NDTV report, Kumar was discharged from the hospital on September 26, 2013, four days after he tweeted the video.