Facebook posts have shared a video showing body bags on gurneys lined up in front of a hospital, which they claim are Covid-19 victims at Mymensingh Hospital in Bangladesh. However, the claim is false. The video actually shows victims of a traffic accident in March 2021 at a different Bangladeshi hospital.

The post's Bengali-language caption reads: "This is not India. It's a scene from Mymensingh medical (hospital). Still there is time. Please, be aware before your beloved ones join this line of dead bodies."

"Oh God, save us from this pandemic," one user wrote.

"Coronavirus is a curse for us," another commented. 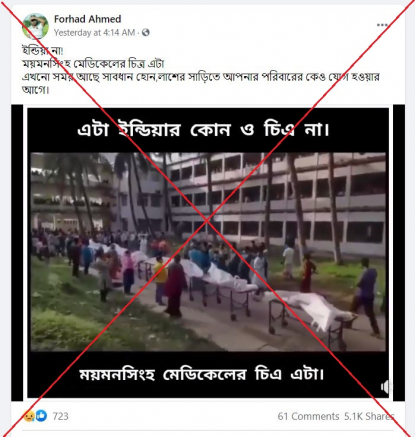 The video was also posted here, here and here with similar captions.

A keyword search in Facebook found similar footage had previously been broadcast by local media outlets in reports about a major road accident on March 26, 2021 in Rajshahi, a northern district of Bangladesh.

Bangladeshi online news portal Silkcitynews.com live broadcast this similar footage on March 26 with a Bengali caption that reads: ‘‘17 people were killed in a head-on collision between a bus and minibus -- live from the hospital morgue."

Below is a comparison between the misleading post (L) and the live broadcast footage (R) from Rajshahi Medical College Hospital:

Another comparative look between the two videos:

Newspaper reports, for example here from the Daily Star, said at the time that 17 people were killed near Katakhali Police Station of Rajshahi on March 26, with the bodies being taken to Rajshahi Medical College Hospital.

Bulbul Habib, a Rajshahi correspondent for The Business Standard newspaper, confirmed the video shows hospital scenes after the road crash.

"I was there on the scene at that time. Dead bodies were kept there for identification by the relatives," he said.