After a fire at a plastics factory in Thailand injured dozens, a photo surfaced in Facebook posts purporting to show a Royal Thai Army helicopter and questioning why the chopper was not deployed to quell the blaze. The claim is misleading; the photo actually shows a helitanker during an exercise in the United States in 2020. Meanwhile, a second photo in the posts genuinely shows a Thai helicopter.

The photos were published here on Facebook on July 5, 2021.

"The Royal Thai Army has chinook, the forest department has a helicopter with a water bucket, why didn't anybody collaborate with them?" the Thai-language post's caption reads.

Chinook refers to a type of military, heavy-lift helicopter. 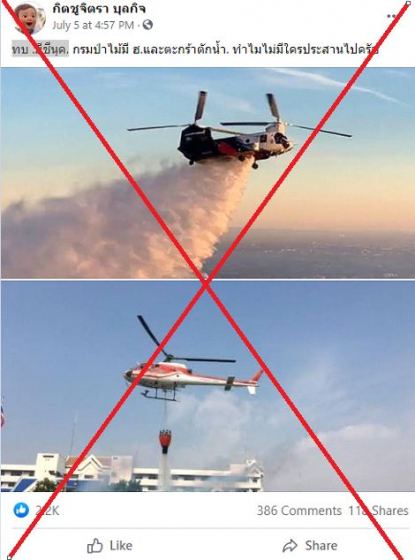 The images circulated online after an explosion at a plastics factory near the Thai capital Bangkok sent plumes of smoke across the skyline, killing one firefighter and injuring at least 33 people, AFP reported.

The photos were also shared on Facebook here and here alongside a similar claim.

A reverse image search on Google found the first photo was published in this article by the US-based blog site Fire Aviation on November 19, 2020.

Below is a screenshot comparison of the photo in the misleading post (L) and on the Fire Aviation website (R):

"The Chinook is based at the Los Alamitos Joint Forces Training Base in Orange County".

The photo was screenshotted from this  footage tweeted by Orange County Fire Authority (OFCA) on November 19, 2020.

The clip shows the helitanker exercise, which was coordinated by  L.A. County Fire Department  and the Orange County Fire Authority (OFCA).

Yesterday we had a successful exercise with @LACoFDPIO to showcase the new joint agency Helitanker. This is a regional asset that can be used in multiple counties to fight fires. The helitanker:
•Takes 1 min to fill 3,000 gallons
•Has a water drop cover of approx 10 acres pic.twitter.com/mzMC2j3pZr

Reverse image searches for the second photo found it was previously published in this 2016 report by Thai news site Manager Online.

The Thai government staged a demonstration to show how the helicopter was used to extinguish fires in Phitsanulok province, the report says.

"Helicopter owned by the Ministry of Natural Resources and Environment was used to extinguish wildfire in Nan, using the water from Nan River, in the middle of a campaign to stop burning the forest," the Thai-language article reads.

Below is a screenshot comparison of the photo in the misleading post (L) and on the Manager Online website (R):

Thailand's Forest Department operates under the Ministry of Natural Resources and Environment.

The photo was also published in another report about the event by a Thai-language website here.