Social media posts have shared pictures that appear to show Philippine President Rodrigo Duterte and US president Abraham Lincoln striking similar poses, suggesting parallels between the two leaders. The claim is misleading; Lincoln’s photo has been digitally altered. The original version of the infamous portrait, taken in 1863, only shows Lincoln’s head and shoulders in the frame.

It shows a side-by-side photo of Philippine President Rodrigo Duterte and Abraham Lincoln, US president from 1861 to 1865. Both are seen gazing into the camera and touching their faces with their right hand. 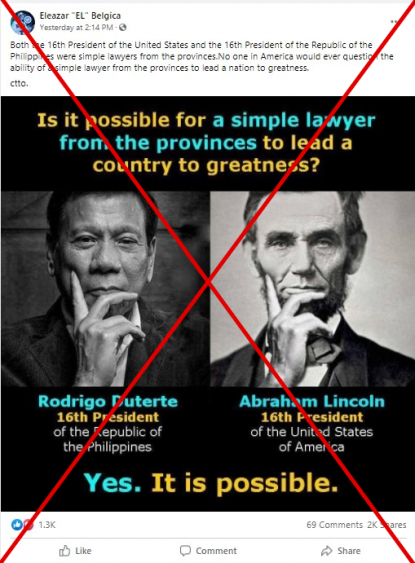 It is correct that both Lincoln and Duterte were lawyers before entering politics, and became the 16th president of their respective countries.

Social media monitoring tool CrowdTangle shows the photo comparison first appeared online in 2016, when Duterte took office, and has been regularly reposted ever since.

Facebook users appear to believe the collage was genuine.

“What a coincidence!! They also have the same habitual pose!!!” another person wrote.

However, the posts are misleading; Lincoln’s portrait, taken 152 years before Duterte’s, has been doctored.

The photo is described on the US Library of Congress website as “Gardner photograph of Lincoln' head-and-shoulders portrait, facing front”.

It does not show Lincoln’s hand touching his face.

Below is a screenshot comparison of Lincoln’s photo in the misleading post (L) and the original image (R): 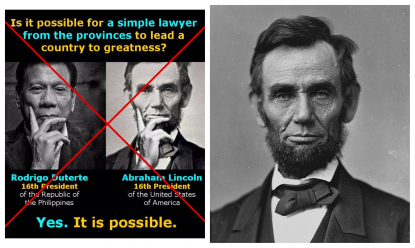 A visual analysis shows the hand added to Lincoln’s portrait was cloned from Duterte’s photo, which was taken by Filipino photojournalist Edwin Tuyay.

Tuyay told AFP that the image is part of a set of photos he captured for local publication Asian Dragon Magazine for its July to August 2015 issue.

Below is a screenshot comparison of Duterte’s photo in the misleading post (L) and the original image (R):