A claim has been shared in multiple YouTube and Facebook posts that Britain's Queen Elizabeth sent a message to Philippine President Rodrigo Duterte expressing admiration for his "good governance". The posts are misleading: the Queen's letter hailed Filipino nurses working in the UK and did not praise Duterte for "good governance".

The claim was shared in this video posted on YouTube on July 6, 2021.

The misleading post circulated online after a political rift was sparked between Duterte and boxer-turned-senator Manny Pacquiao. 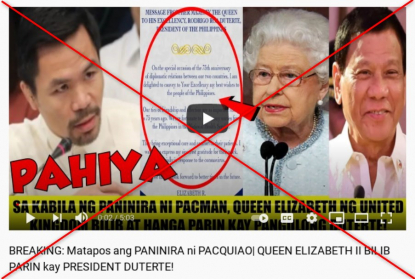 A screenshot of the misleading post taken on July 9, 2021

The video's thumbnail shows a message from Queen Elizabeth II to Duterte to mark 75 years of diplomatic relations between the UK and the Philippines.

A voiceover states in part: "Queen Elizabeth herself conveyed her support for President Duterte’s good governance."

The video then shows a British vlogger talking about the Queen's message to Duterte.

Comments on the post indicate some viewers were misled by it.

"Long live the queen her majesty for seeing the real situation in the country," one wrote.

Another commented: "Thank you for appreciating Pres. Duterte!"

A keyword search on Facebook found the Queen's message to Duterte was originally shared by the British Embassy in Manila here on Facebook on July 4, 2021.

The message reads in part: "We are fortunate to have many nurses from the Philippines in the National Health Service.

"They bring exceptional care and comfort to their patients. I wanted to express my sincerest gratitude for their work, especially in response to the coronavirus."

In the message, there is no reference to Duterte's "good governance", as claimed in the misleading posts.

In the clip, he also made no reference to the Queen purportedly praising Duterte for his "good governance".