US soccer players were facing flag, not snubbing veteran

Social media posts and online articles claim the United States women's national soccer team disrespected a World War II veteran while he performed the national anthem before a match. But US Soccer and a member of the team said some players were looking away from the veteran because they were facing the American flag -- assertions backed by images of the event.

The claims stemmed from July 5 match between the United States and Mexico in Connecticut at which Dupre performed the anthem on a harmonica. The international friendly was part of a send-off series, as the team prepares for the Tokyo Olympics.

Although members of the US women's team have come under fire for protesting during the national anthem in the past, they were not snubbing Dupre during his performance.

"Some players were simply looking at the flag on a pole located at one end of the stadium," Neil Buethe, chief communications officer for US Soccer, told AFP.

"The players have known Pete since 2019, have deep respect for him and his military service, and have truly embraced him as almost another member of the team," Buethe said.

Carli Lloyd, a member of the US National Women's Team, also took to Twitter to reject the claim, saying players were facing the flag.

We turned because we faced the flag https://t.co/1JJHUWGCLv

Images shared on the official Instagram account of the stadium where the match was played show that the American flag was flying near the scoreboard -- the direction some of the players were facing. 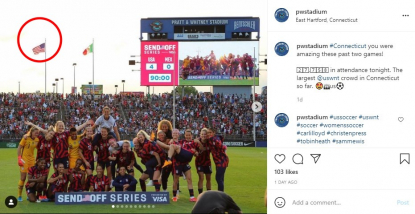 The screenshots below show the US and Mexican flags (circled in red), in relation to DuPre (circled in orange) as both teams stood behind him during the anthem, with several of the US players turned toward the American flag as the veteran played.

A screenshot taken on July 9, 2021 shows a video posted on YouTube of a US Women's National Team friendly versus Mexico

A screenshot taken on July 8, 2021 shows a video posted on YouTube of a US Women's National Team friendly versus Mexico