A video has been viewed tens of thousands of times on Instagram and Facebook alongside a claim it shows actual footage of an Iraqi soldier bidding farewell to his family. The claim is false: the video in fact shows an actor playing an Iraqi soldier in a short film that was released in 2015.

Text overlaid at the bottom of the video reads: "Iraqi soldier says goodbye to his family during war". 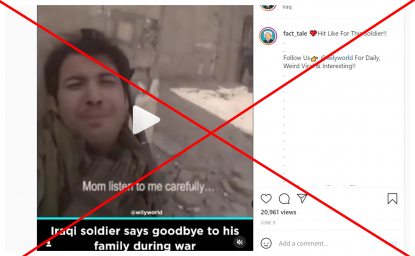 A screenshot of the misleading post taken on July 8, 2021

Comments on the post indicate some social media users were misled by the video.

"I hope he made it out," one user wrote. "No human should ever have to live like this," commented another.

An identical video was also shared alongside a similar claim on Facebook here, here, here and here.

A reverse image search of the video’s keyframes extracted using InVID-WeVerify, a digital verification tool, found the footage in fact shows a scene from a 2015 short film called 'Dialing'.

Below is a screenshot comparison of the video in the misleading posts (L) and a keyframe from the 2015 film (R):

The clip that features the soldier's farewell was uploaded on the film festival's official YouTube channel.

Menhel Abbas, the actor who played the Iraqi soldier in the film, previously refuted misleading claims about the clip in this Instagram message on May 6, 2017.

His Arabic-language post translates in part as: “I'm alive, in this video I'm just acting."