An image has been shared repeatedly in multiple Twitter posts that claim it shows UK Prime Minister Boris Johnson watching a speech by Chinese President Xi Jinping. The image, however, has been doctored. The original image shows Johnson watching a football match between England and Germany in Euro 2020. 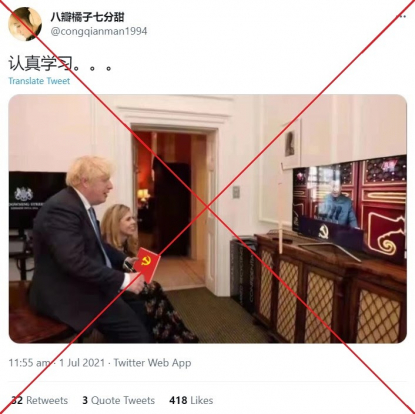 A similar image was also shared here and here on Twitter.

Comments from some social media users on the posts indicate they were misled by the image.

One user wrote: "The identity of an underground party member is exposed..." Another commented: "Can't believe they're the victims of the communism virus".

A reverse image search on Google found a similar photo shared by Johnson on Twitter on June 30, 2021.

Johnson and his wife can be seen watching a football match on a television screen. Unlike the doctored image, Johnson does not appear to be holding anything in his hand.

The image of Xi used in the misleading posts corresponds with footage of a speech he gave on July 1, 2021 to mark the 100th anniversary of the Chinese Communist Party.