Skip to main content
A health worker inoculates a college student with a dose of Covishield vaccine against the Covid-19 coronavirus in Bangalore on July 5, 2021. ( AFP / Manjunath Kiran)

Multiple Twitter and Facebook posts claim that a male doctor they name as the spokesman for the Indian health ministry died on June 16, 2021 after receiving a Covid-19 vaccination. The claim is false: as of July 12, 2021, the man -- Dr Subramanian Swaminathan -- is not dead. He is the director of infectious diseases at an Indian hospital, not the spokesman for the Indian health ministry. The video shared in the posts shows him talking about India's first suspected vaccine-related death. 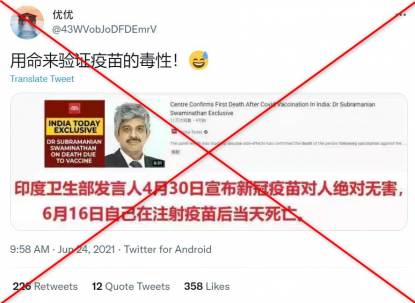 The Chinese-language text over the image states: "The spokesperson of India's Ministry of Health announced Covid-19 vaccines do no harm to humans on April 30. He died on June 16 on the same day he was vaccinated."

The post's Chinese-language caption says: "He gave his own life to verify the toxicity of the vaccine!"

The same image was also shared alongside a similar claim on Twitter here and here; and on Facebook here and here. The news anchor introduces Dr Swaminathan at the two-minute-30-second mark as: "The director of Infectious Diseases at the Gleneagles Global Hospital".

This corresponds with this LinkedIn profile for Dr Swaminathan.

Below is a screenshot comparison of the photo in the misleading post (L) and the YouTube video's thumbnail (R):

A screenshot comparison of the misleading photo and the original YouTube thumbnail.

On June 15, 2021, the Indian government held a press briefing here in which officials said India had recorded its first Covid-19 vaccine-related death, according to local media reports on the briefing.

A 68-year-old man died of a severe allergic reaction after receiving a Covid-19 vaccination in India on March 8, 2021, according to a report by National Adverse Events Following Immunization (AEFI) Committee, dated June 4, 2021.

The India Today video is a news segment about the suspected vaccine-related death. The interview with Dr Swaminathan is part of the report, in which he discusses vaccine side-effects and benefits.

The deceased man, who was not identified in the official report, was inoculated with Covishield, the local-produced version of the AstraZeneca vaccine.

Dr Swaminathan has made several public appearances since the misleading claim circulated online.

He appeared in an interview with India Ahead News, a local English news channel, on June 19, 2021.

He also attended a live Zoom lecture organised by the Indian Medical Association on June 26, 2021.

Lav Agarwal is a joint secretary in the Ministry of Health and Family Welfare (MoHFW), and he conducts all of the press conferences for the Ministry.