Skip to main content
A street vendor walks past a foot massage in Hanoi 27 February 2001. This new business, imported from China, seems not to be destined to low-incomed people like this vendor, who, walking all the day along streets, and whose daily income is just about one dollar, needs in fact more than anyone else a foot massage because one hour service costs 60,000 dongs or more than 4 dollars. AFP PHOTO/Hoang Dinh NAM/na. ( AFP / HOANG DINH NAM)

Multiple Facebook posts claim regular toe massages can help prevent brain haemorrhages. The posts suggest the massages may trigger a response in a person's brain that reminds them to urinate, expelling harmful acid. Neurologists, however, say there is no evidence to support the claim.

The claim was shared here on Facebook on February 25, 2021.  It has been shared more than one thousand times. 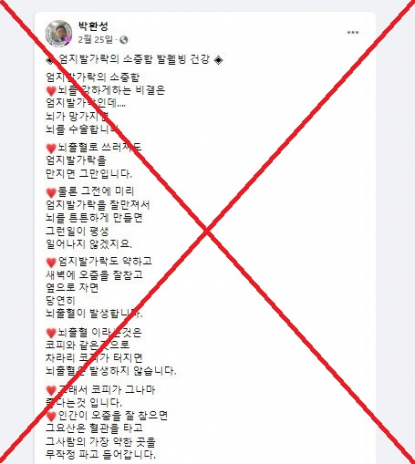 The post's Korean-language caption reads in part: "When humans hold in urine often, uric acid rides up the blood vessels and attacks wherever part of the body that is the weakest.

"Why do brain haemorrhages occur? The answer is because of a habit of holding in urine in the early morning and sleeping on one's side.

"Then what should we do? If you massage your big toe you will fix a sensor in your brain that has been rusted, and your brain will tell you when to let out urine."

Intracerebral haemorrhages are a form of stroke that occurs when a blood vessel in the brain bursts, according to the US Centers for Disease Control and Prevention (CDC).

Uric acid is a normal body waste product which is expelled as urine, according to the University of Rochester Medical Center's Health Encyclopedia.

An excess of uric acid in the body can cause disorders like gout or kidney stones, the centre says.

Similar claims have been shared on Facebook here, here, here and here.

Experts say there is no evidence that massaging someone's toe or feet can help prevent brain haemorrhages.

Professor Kim Beom-joon,  a neurologist at Seoul National University Bundang Hospital, told AFP:  "Uric acid is expelled as urine as part of a natural process. Holding in urine will not lead to a rise in uric levels."

Kim said a 2013 study  found that "uric acid does not cause brain haemorrhages".

He said the study indicated that brain haemorrhages among stroke patients were more related to "reduced kidney function -- which causes a rise in uric acid levels -- rather than uric acid itself."

"[There is] no evidence yet that shows stimulating sections of the body leads to structural changes in brain function", he said.

Professor Kim Chi-kyung, a neurologist at Korea University Hospital, told AFP that uric acid levels are"closely related to factors like the consumption of red meat or the health of your kidneys, not holding in urine."

"The most recent studies suggest that there may be little connection between the two," Kim said. "Given the limitations shown even by modern medical science in controlling blood pressure, there is little reason to believe such alternative medical practices will have any reasonable effect".

AFP could not locate any credible studies on multiple academic databases to support the misleading claim in the Facebook posts.