Skip to main content
This picture shows a display featuring a seated Buddha during Poson Poya festival in Colombo on June 7, 2020. Poson Poya is an annual Buddhist festival marking the introduction of the religion to the island. ( AFP / LAKRUWAN WANNIARACHCHI)

A photo has been shared in multiple Facebook posts that claim it shows a lavish Buddhist festival in Sri Lanka during the Covid-19 pandemic. But these posts are misleading: the photo predates the Covid-19 pandemic and has circulated in unrelated news reports since July 2018.

The post's Sinhala-language caption translates as: "The 84,000 milk rice portions offered to the Ruwanweliseya... People who earned their daily wage through labourer jobs are without food these days. If this food was offered to such people, we too would join in blessing the act." 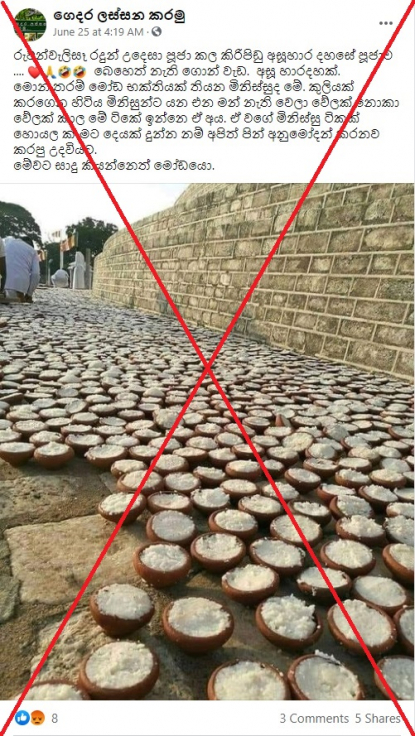 Ruwanweliseya is a stupa located in the North central province of Sri Lanka and an important place of worship for Buddhists.

The Covid-19 pandemic has led to a "severe" loss of jobs and incomes in Sri Lanka, according to this World Bank report.

The misleading post circulated online following the annual Poson Poya event, which fell onJune 24 this year that marked the introduction of Buddhism to Sri Lanka.

Comments from social media users indicate people thought the photo was taken during the Covid-19 pandemic.

“We should stop food wastage like this, particularly right now”

“I completely agree. When I saw this post I felt this alms giving would have meant more if people who are going without food at present were given food instead”

But these posts are misleading: the photo has circulated in unrelated news reports before the Covid-19 pandemic.

A reverse image found the photo was featured in this local news report published on July 31, 2018.

The report reads in part: "Former Minister Mervyn Silva had offered 84,000 portions of milk rice before the relics enshrined in the Ruwanwelisaya stupa."

Below is a screenshot comparison of the photo in the misleading posts (L) and the photo published in the 2018 news report (R): 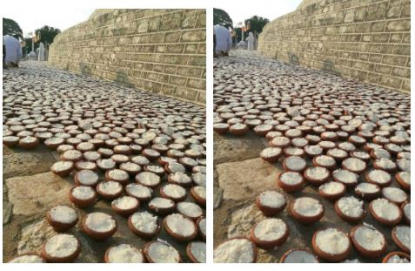 The same news was published in another local news website as seen here on July 31, 2018.

A spokesperson for the office that manages the Ruwanweliseya stupa also denied the claim in the misleading posts.

"No such offering was made  on Poson poya day due to restrictions imposed by the government. There is no truth to the claim," the spokesperson told AFP on June 28, 2021.