Three photos have been shared in multiple Facebook posts that claim they show Syrian refugees traveling to New Zealand to seek asylum. However, this claim is false: none of the photos show refugees making their way to New Zealand; they in fact show migrants in several European countries.

The Hindi-language post translates in part as: "The distance from Syria to New Zealand is 16,115 kilometers, there is a very big ocean in the middle...!!* Without any aircraft or sailing, walking is impossible. Yet, all these Muslims who call themselves war victims, helpless and completely poor refugees, go six and a half times far away to New Zealand." 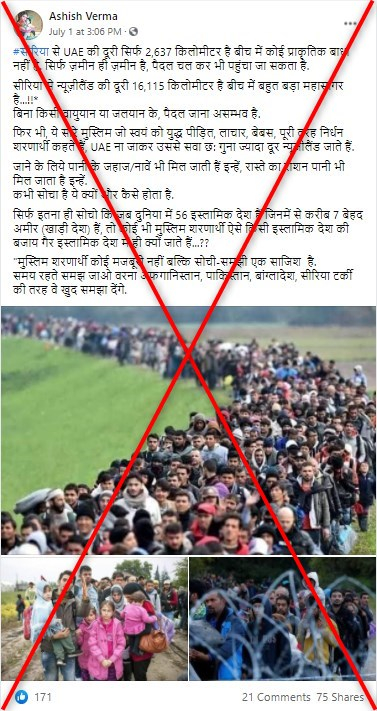 A screenshot of the misleading post taken on July 6, 2021

The claim is false: none of the photos show Syrian refugees making their way to New Zealand.

A reverse image search on TinEye found the first photo was published here by the Getty Images photo agency on October 23, 2015.

The photo is captioned: "Migrants are escorted through fields by police as they are walked from the village of Rigonce to Brezice refugee camp on October 23, 2015 in Rigonce , Slovenia."

Below is a screenshot comparison of the first photo in the misleading posts (L) and the Getty Images photo (R):

The photo was also shared with the correct caption in this report by the British newspaper DailyMail.

The second photo was taken in the border of Greece and Macedonia by AFP photographer Robert Atanasovski on October 8, 2015. It can be viewed here on AFP's website.

The photo's caption states: "Migrants and refugees queue to enter a camp after crossing the Greek border into Macedonia near Gevgelija on October 8, 2015."

Below is a screenshot comparison of the second photo in the misleading posts (L) and the AFP photo (R):

Further reverse image searches on TinEye found the third photo was published here by the Reuters news agency on October 16, 2015.

Its caption reads in part: "Migrants make their way after crossing the border at Zakany, Hungary October 16, 2015."

Below is a screenshot comparison of the third photo in the misleading posts (L) and the Reuters photo (R):