Skip to main content
A Sri Lanka supporter waves a flag in the crowd during the first one-day international (ODI) between England and Sri Lanka at Riverside Ground, Chester-le-Street, north England on June 29, 2021. ( AFP / Lindsey Parnaby)

A claim has been shared in multiple social media posts that the captain of the Sri Lankan cricket team lashed out against fans during a press conference on June 28, 2021, purportedly in response to criticism after some players violated Covid-19 restrictions during an international series. But the claim is false: the cricket captain made no such remarks during the press conference, in which he had actually apologised to fans on behalf of the team.

The graphic purports to show a quote attributed to Perera, with the superimposed Sinhala-language text reading: “'Degrading us on social media will not aid in achieving victories and will only crush us mentally, leading to more defeats. If you can't stop criticising just stop watching matches.' - Leader Kusal at the press conference held today” 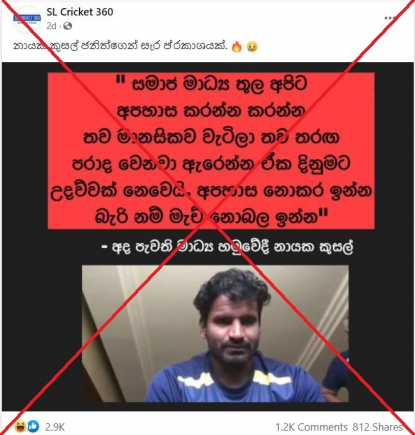 Screenshot of the misleading post captured on June 29, 2021 ( ACER)

The misleading post circulated online after three players of the Sri Lankan cricket team were found violating their Covid-19 quarantine restrictions during a series in England, AFP reported.

An identical claim was also shared in Facebook posts here and here.

However, the claim is false: Perera made no such remarks during the press conference on June 28, 2021.

Keyword searches on Google found the full video of the press conference uploaded here on YouTube on the same day.

Nowhere in the 18-minute video did Perera lash out at cricket fans and say they should stop watching matches if they cannot stop criticising players, as the misleading posts allege.

“I apologize as a captain because with the issues that have emerged, we have to appreciate that our fans are still with us,” Perera could be heard saying at the video’s 17-minute mark.

“I ask that you continue to support us in this manner in the future as well. We plan to correct our mistakes and restore our winning mentality as soon as possible.”

Sri Lankan news outlet NewsWire also reported on his apology and included the full video of the press conference here.

Further keyword searches did not yield any reliable reports that indicate Perera lashed out at fans on June 28, 2021.

The image used in the graphic featured in the misleading posts was taken from a press conference in May 2020.